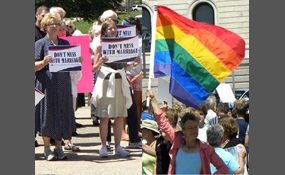 Where do you stand on the Culture War?

Allow gay people to marry. No Freedom of Religion. Force people to bake cakes and wed gays because homophobia goes against my morals! Support military that does not invade countries and massacre its inhabitants. Oppose Gun rights.
2 votes
1 comment
Cultural Liberal - Voter Comments

No gays. Put them in concentration camps. No freedom of religion. If they don't agree with you put them in camps. Massive military. Massacre everyone that does not praise your country. No Gun rights except for special police forces who work for t... he government   more
0 votes
0 comments
Cultural Statist - Voter Comments
No Comments
Vote & Comment
Leave a comment...
(Maximum 900 words)

Heraclitus says2015-04-12T09:10:03.1966196-05:00
Report Post
Because Liberals want to force Christians to bake cakes for gay people and force priests to wed gay people. They have no respect for Christianity.

ladiesman says2015-04-12T09:16:49.4049502-05:00
Report Post
I support both gay marriage and freedom of religion. But freedom of religion does not include infringing on other people's rights/interests and using your religious beliefs to back it up.