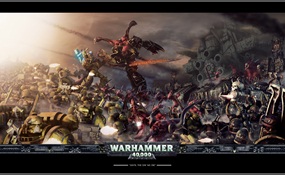 Let's bring some 40k into DDO ^^ Where my Imperials at? The Boyz? The other xenos? I s'pose you to Chaos chaps.

Dan Abnett is a British comic book writer and novelist. He has been a frequent collaborator with fellow writer Andy Lanning, and is known for his work on books for both Marvel Comics, and their UK imprint, Marvel UK, since the 1990s, and also 2000 A... D. He has also contributed to DC Comics titles, and his Warhammer Fantasy and Warhammer 40,000 novels and graphic novels for Games Workshop's Black Library now run to several dozen titles and have sold over 1,150,000 copies as of May 2008. In 2009 he released his first original fiction novels through Angry Robot books   more
1 vote
0 comments
Dan Abnett - Voter Comments
No Comments
Vote & Comment
2