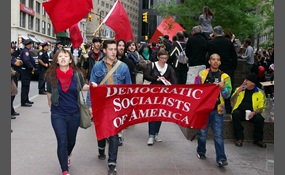 Capitalism is an economic system in which trade, industry, and the means of production are largely or entirely privately owned and operated for profit. Central characteristics of capitalism include capital accumulation, competitive markets and wage ... labour. In a capitalist economy, the parties to a transaction typically determine the prices at which assets, goods, and services are exchanged. The degree of competition, role of intervention and regulation, and scope of state ownership varies across different models of capitalism. Economists, political economists, and historians have taken different perspectives in their analysis of capitalism and recognized various forms of it in practice. These include laissez-faire capitalism, welfare capitalism, crony capitalism and state capitalism; each highlighting varying degrees of dependency on markets, public ownership, and inclusion of social policies. The extent to which different markets are free, as well as the rules defining private property, is a matter of politics and policy. Many states have what are termed capitalist mixed economies, referring to a mix between planned and market-driven elements   more
12 votes
1 comment
Venture Capitalism/Conservatism/The Right - Voter Comments

I don't Know (Either You have been taught or just "think" that Socialism is evil or...)

0 votes
0 comments
I don't Know (Either You have been taught or just "think" that Socialism is evil or...) - Voter Comments
No Comments
Vote & Comment
Leave a comment...
(Maximum 900 words)