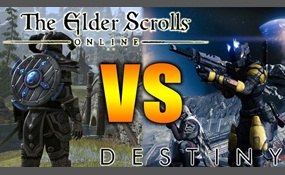 Which one do you guys think will be better. I have an Xbox one and I'm trying to decide which one I should get.

The Elder Scrolls Online is a massively multiplayer online role-playing video game developed by ZeniMax Online Studios, which was released on April 4, 2014 for Microsoft Windows and OS X, with PlayStation 4 and Xbox One versions plan to be released ... in June. It is a part of The Elder Scrolls video game franchise, of which it is the first open-ended multiplayer installment. It was announced on May 3, 2012, in an exclusive reveal by Game Informer and formally revealed in the same month's issue of the magazine   more
7 votes
2 comments
The Elder Scrolls Online - Voter Comments

Destiny is an upcoming massively multiplayer online action role-playing first-person shooter video game in a "mythic science fiction" open world setting. It is developed by Bungie and published by Activision as part of a ten-year publishing deal. Th... e game will be released on the PlayStation 3, PlayStation 4, Xbox 360, and Xbox One video game consoles on September 9, 2014, with a beta testing phase planned for this upcoming summer. The beta will launch first on PlayStation 3 and PlayStation 4. Bungie demoed live gameplay footage of Destiny at Sony's E3 2013 conference   more
1 vote
1 comment
Destiny - Voter Comments

ECLP says2014-05-06T09:14:28.6470408-05:00
Report Post
after halo and their great work done with it im sure this will be better with the new technology and the only reason people dont trust it is because of 343 botching the new halo which bungie had nothing to do with so i expect destiny to be a new master piece of art
Vote & Comment
No comments yet.
Leave a comment...
(Maximum 900 words)
Privacy Policy | Terms of Use
Sitemap | View Desktop Version
©2021 Debate.org. All rights reserved.