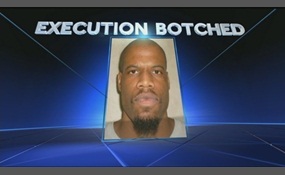 Did Clayton Lockett get what he deserved?

Clayton Lockett was the Oklahoma man who was sentenced to death for crimes he committed in 1999. He kidnapped, raped, and brutalized several women. One of those women he shot in the face twice, and then he proceeded to bury her alive. During Lockett's execution, the experimental drugs used to execute him didn't work, and he struggled and writhed in pain for 43 minutes

Yes, his crimes warranted what happened to him.

7 votes
3 comments
Yes, his crimes warranted what happened to him. - Voter Comments

No, he was subjected to cruel and unusual punishment.

5 votes
1 comment
No, he was subjected to cruel and unusual punishment. - Voter Comments

Rightwing15 says2014-05-08T22:21:00.3944000-05:00
Report Post
i honestly don't believe that there should be scientific experimentation on death row inmates, no matter what the crime. its torture and we have outlawed unusual punishment in america.
Vote & Comment
Leave a comment...
(Maximum 900 words)

Rightwing15 says2014-05-08T22:44:55.5306664-05:00
Report Post
Really? It would be awful, don't get my wrong, rape is awful but the real truth is that they should've either used a euthanasia that was proven to work or shot him, the loss of life to any human being is never ideal but is a necessary thing to have happen. Also personally i would've felt bad that i let it happen, the idea that they would let it carry on that long is terrible.

Fight4Liberty says2014-05-08T23:00:12.8759804-05:00
Report Post
The problem I have with this poll is the title question evokes an emotion whilst the answer evokes a legal dispute. Do I really care the agony he endured? No. Legally this was wrong. The Eighth Amendment forbids a cruel and unusual punishment. Therefor, he should have been used as a guinea pig.

Kreakin says2014-05-09T02:59:09.2868918-05:00
Report Post
Cruel and unusual ifwas intended to cause protracted suffering but not if it wasn't intentional. Death penalty doesn't need to be pain free.
Privacy Policy | Terms of Use
Sitemap | View Desktop Version
©2021 Debate.org. All rights reserved.