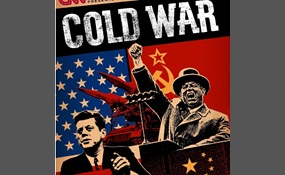 Did the Cold War ever truly End?

Did the Cold War really end with the fall of the USSR? Explain why or why not.

The Ukrainian revolution of February 2014 took place after a series of violent events towards protesters in the capital of Kiev that culminated with the flight and subsequent impeachment of the then-President of Ukraine, Viktor Yanukovych. This was ... immediately followed by a series of changes in quick succession in Ukraine's sociopolitical system, including the formation of a new interim government, the restoration of the previous constitution, and the call to hold impromptu presidential elections within months.After a first revolution, namely the "Orange Revolution" in 2004, Ukraine had been mired by years of corruption, mismanagement, lack of economic growth, currency devaluation, and an inability to secure funding from public markets. Because of this, Yanukovych sought to establish closer relations with the European Union and Russia in order to attract the capital necessary to maintain Ukraine's standard of living without affecting the local population significantly. One of these measures was an association agreement with the European Union which would provide Ukraine with funds contingent to several reforms in almost all aspects of Ukrainian society   more
10 votes
4 comments
No - Voter Comments

Welliss says2015-04-25T20:42:00.1580010-05:00
Report Post
I don't think that the Cold War ever really ended. I believe that the USSR just took a new form. The U.S and its allies are still competing against Russia and its allies to spread or contain the influence of each other.

58539672 says2015-04-25T22:28:55.4334463-05:00
Report Post
Their is still a divide between east and west. Plus the US and Russia are still the largest weapons manufacturers in the world and are actively arming their allies. Proxy are also going on, with Ukraine, Syria, and Iran being a few known examples. I just think one player changed his hat, Russia, and another, China, stepped up to the table.

imabench says2015-04-25T22:19:39.5304925-05:00
Report Post
the cold war was a nuclear arms race, a race to space, and an entanglement between the US and the USSR over the spreading of communism into different areas. All of that ended when Russia collapsed, and from the 90's up until 2001 America was without doubt number 1 in the world. The Cold War did in fact end with the Soviet Union

Stefy says2015-04-25T22:02:57.1710696-05:00
Report Post
Yea and no but it did signifigantky change. The cold war had to do with the containment of communism which isnt really as big a thing anymore. They fight about other stuff now. Really if you actually think about history all wars are connected and can be seen as a continuatjon. Particularly ww1-now.

biggest_pro_going says2015-04-26T05:24:09.1101934-05:00
Report Post
I like Russia (u may guess) but it doesn't really pose a threat to the west anymore, NATO is about 2 times as strong as it and Russia is not the soviets they have stopped spreading there influence.
Privacy Policy | Terms of Use
Sitemap | View Desktop Version
©2020 Debate.org. All rights reserved.