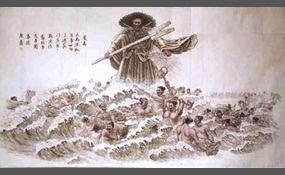 Did the Xia Dynasty actually exist?

Yes Man is a 2008 British-American romantic comedy film directed by Peyton Reed, written by Nicholas Stoller, Jarrad Paul, and Andrew Mogel and starring Jim Carrey. The film is based loosely on the 2005 book Yes Man by British humorist Danny Wallace... , who also makes a cameo appearance in the film.The film was a box office success, despite receiving mixed reviews from critics. It was released on December 19, 2008, opening at No. 1 at the box office in its first weekend with $18.3 million and was then released on December 26, 2008 in the United Kingdom going straight to the top of the box office in its first weekend after release. Production for the film began in October 2007 in Los Angeles   more
2 votes
1 comment
Yes - Voter Comments

No is a 2012 Chilean drama film directed by Pablo Larraín. The film is based on the unpublished play El Plebiscito, written by Antonio Skármeta. Mexican actor Gael García Bernal plays René, an in-demand advertising man working in Chile in the late 1... 980s. The historical moment the film captures is when advertising tactics came to be widely used in political campaigns. The campaign in question was the historic 1988 plebiscite of the Chilean citizenry over whether dictator Augusto Pinochet should stay in power for another eight years.At the 85th Academy Awards the film was nominated for the Best Foreign Language Film Oscar   more
2 votes
0 comments
No - Voter Comments
No Comments
Vote & Comment
Leave a comment...
(Maximum 900 words)

Gustav_Adolf_II says2015-05-22T22:26:39.4734915-05:00
Report Post
It's possible that the Xia dynasty existed, but there isn't much evidence and what evidence there is is pretty shaky. If the dynasty existed, then the stories about them are widely exaggerated.

Diqiucun_Cunmin says2015-05-22T23:38:11.2683347-05:00
Report Post
@Gustav: Stories about all dynasties are widely exaggerated; there's just fewer mythological elements in more recent dynasties. History is, after all, written by the victors. Anyhow, considering the sheer amount of literature surrounding the Xia Dynasty, I cannot bring myself to believe that none of that never happened (nor Tang or Yao, for that matter). Yellow Emperor might be a bit more mythological, though.