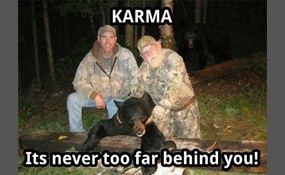 Do you believe in Karma?

Auragirl360 says2014-06-02T20:16:10.5498660-05:00
Report Post
Karma doesn't mean that you do something bad and you instantly get pooped on by a bird. That's a common misconception. Buddhism is about spirituality, so Karma is a spiritual thing. Ever noticed how a lot of us feel bad after lying/ cheating etc? That regret is a form of Karma. Karma takes many different forms. A lot of it has to do with your future lives, too, whether you believe in that or not. It's a bit like the Indian Caste system. The better you are in this life, the better your next life will be. But to Buddhists, betterness doesn't mean more money. It means enlightenment. If you do well in this life, you will have a greater chance if finding the truth and being free of desire in the next life. Just my opinion.
Vote & Comment
2

Norway, officially the Kingdom of Norway, is a Scandinavian unitary constitutional monarchy whose territory comprises the western portion of the Scandinavian Peninsula, Jan Mayen, the Arctic archipelago of Svalbard, and the sub-Antarctic Bouvet Isla... nd. Norway has a total area of 385,252 square kilometres and a population of 5,109,059 people. It is the 2nd least densely populated country in Europe. The country shares a long eastern border with Sweden, which is the longest uninterrupted border within both Scandinavia and Europe at large. Norway is bordered by Finland and Russia to the north-east, and the Skagerrak Strait to the south, with Denmark on the other side. Norway's extensive coastline, facing the North Atlantic Ocean and the Barents Sea, is laced with fjords, a renowned part of its landscape. The capital city Oslo is the largest in the nation, with a population of 630,000. Norway has extensive reserves of petroleum, natural gas, minerals, lumber, seafood, fresh water, and hydropower.Two centuries of Viking raids to southern and western areas tapered off following the adoption of Christianity in AD 994   more
6 votes
1 comment
No - Voter Comments

discomfiting says2014-06-02T14:48:47.7245227-05:00
Report Post
I don't believe bad things happen to bad people or good things happen to good people. I don't believe that doing good will get you goodness or doing bad will get you badness. Hitler is one of the most notorious war criminals yet he never payed a punishment; some say death is a punishment and that's karma but I don't believe that's karma. I see starving poor people all over the world who are good people and I see corrupt & evil politicians + business men who protest against giving high wages, protest on giving universal healthcare and protest against giving people what they deserve. There are good people who don't get the goodness they deserve and the badness that the bad deserve. Sometimes it does happen but maybe that is just randomness and coincidence; not karma.
Vote & Comment
3

Not necessarily, but I think it is possible.

There are many theoretical possibilities in our universe. The fact that we cannot currently prove them true does not prove them false.
2 votes
0 comments
Not necessarily, but I think it is possible. - Voter Comments
No Comments
Vote & Comment
Leave a comment...
(Maximum 900 words)

discomfiting says2014-06-03T00:20:10.9006000-05:00
Report Post
Aqua, I agree with you entirely but that's not the same karma that a typical american would say is karma. There are some exceptions to that theory of regret being karma because a psychopath or sociopath can go their entire life without feeling remorse for their actions. Hitler, for an example, after everything he did and started, showed little remorse as we learn more about him and his personality. I think for most of the world, people feel guilt but not all. So karma would exist like you said but not for all people.