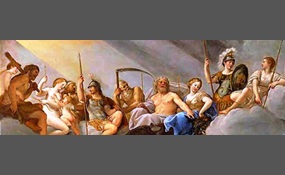 Do you believe in the possibility of a god, if not the god?

By this I mean... Could there be some sort of being out there, not necessarily bible God?

God is the only god

In monotheism and henotheism, God is conceived as the Supreme Being and principal object of faith. The concept of God as described by theologians commonly includes the attributes of omniscience, omnipotence, omnipresence, omnibenevolence, divine sim... plicity, and eternal and necessary existence. In theism, God is the creator and sustainer of the universe, while in deism, God is the creator, but not the sustainer, of the universe. Monotheism is the belief in the existence of one God or in the oneness of God. In pantheism, God is the universe itself. In atheism, God is purported not to exist, while deemed unknown or unknowable within the context of agnosticism. God has also been conceived as being incorporeal, a personal being, the source of all moral obligation, and the "greatest conceivable existent". Many notable medieval philosophers and modern philosophers have developed arguments for and against the existence of God.There are many names for God, and different names are attached to different cultural ideas about God's identity and attributes   more
9 votes
2 comments
God is the only god - Voter Comments

There are absolutely no gods.

7 votes
1 comment
There are absolutely no gods. - Voter Comments

Yes, there could be another god

5 votes
1 comment
Yes, there could be another god - Voter Comments

UtherPenguin says2015-06-21T23:50:53.7093118-05:00
Report Post
@reece Your initial comment was a blatant strawman of theism (since theism doesn't only incorporate Christianity but also the majority of most religions).

MakeSensePeopleDont says2015-06-22T02:18:45.2621138-05:00
Report Post
Think about this: In WWII, Allied forces took a bunch of islands in the Pacific, built airbases, and started launching missions from them. During this time, Allies started dropping supplies from planes to the natives of the islands. The islands were so disconnected from modern life they had no idea what a plane was, they thought it was "the Gods". When the war ended and the planes stopped dropping supplies to the native villages, the natives started building monuments and idols to the "Gods"; idols and monuments shaped like planes. They also started making tributes and creating entire new cultural norms and celebrations trying to convince the "Gods" to return and start dropping supplies again. This has been WELL documented through video, photographic, and written documentation and can still be viewed today. So, is it more likely that a magically all knowing being(s) created us and started us on this path, or that a superior, currently unknown race of beings that may or may not still exist today, stopped by Earth, and used it as say a military base like we did with the Pacific islands? Maybe our ancestors mistakenly thought of a superior race coming down "from the heavens" as gods, not knowing they were just "people" from another place that had technology.

ladiesman says2015-06-23T10:29:26.2591358-05:00
Report Post
It is possible that the Judea-Christian god is not the only deity there is. The gods who were worshiped in ancient times (e.G. Ancient Greece and Egypt) might exist as well; they are as real as any other deities in other religions.

FreedomBeforeEquality says2015-06-23T11:28:37.6362184-05:00
Report Post
I suppose polytheism made sense in the day ... Since you could not link physical happenings through matter and energy the way we realize the universe today. Assuming there was a god focused only on the physics of one particular thing (wind, water, whatever) was surely just a sign of how the universe was viewed. Most all new religions can agree that everything in the world is intertwined and can claim its root from some singular central force, our alpha.

FreedomBeforeEquality says2015-06-23T11:31:10.8810719-05:00
Report Post
That could have very well been due to the holistic views of wiccans and other religions that treat the earth, nature, and humans all as one thing. Pretty ironic really.