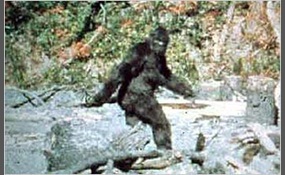 Do you believe that big foot exists?

I don't really believe that a "big foot" exists. I believe that there is a possibility of some weird mutated creature that is responsible for various sightings. It could also be some type of humanoid thing or an animal of some kind. I highly doubt it's a monster but it's still gun to read about and watch films about. There's probably a

There are reasonable explanations for most things. These sightings are probably of bears or escaped pet chimps.
13 votes
2 comments
No - Voter Comments

Sfaulkner says2014-06-24T22:47:42.8007311-05:00
Report Post
The famous Patterson-Gimlin footage was admittedly fake; not by Gimlin but by the guy in the suit. All other accounts are also not reliable because eyewitness accounts, especially fearful ones, are exaggerated, can not always be trusted, and they could have seen something else that they thought was Bigfoot; footage and footprints can be faked.

There have been fossils of other humanoids found in various parts of the world that dates back to only a couple thousand years ago. Also there are so many sightings of "big foot" and strange missing persons cases that take place in national parks an... d forests mostly in the Pacific north west that were not hoaxes. It's possible there is some type of animal that we don't know about yet. There have been many species of animals that we have not found until very recently like the bily ape from Congo   more
4 votes
0 comments
Yes - Voter Comments
No Comments
Vote & Comment
4

I don't know enough about this

Dilara says2014-06-24T19:03:55.8560592-05:00
Report Post
That's where I stand former land. There have been fossils of other humanoid animals (not our kind) that have been found in Asia and Europe. The weirdest thing is that these fossils date back to only a couple thousand years. It's possible some type of humanoid creature could still be around today.