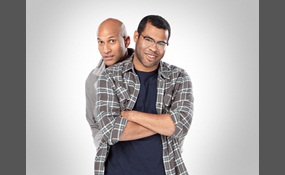 Do you pefer key and peele over pete holmes

Key and peele is awsome

Key & Peele is an American sketch comedy television show. It stars Keegan-Michael Key and Jordan Peele, both former cast members of MADtv. Each episode of the show consists of several pre-taped sketches starring the two actors, introduced by Key and...  Peele in front of a live studio audience. The sketches cover a variety of societal topics, often with a focus on African-American culture and race relations.Key & Peele won a 2013 Peabody Award and was nominated for a 2013 Writers Guild Award   more
9 votes
2 comments
Key & Peele - Voter Comments