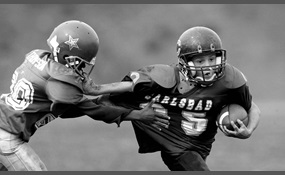 North Carolina is a state in the Southeastern United States. The state borders South Carolina and Georgia to the south, Tennessee to the west, Virginia to the north, and the Atlantic Ocean to the east. North Carolina is the 28th most extensive and t... he 10th most populous of the 50 United States. North Carolina is known as the Tar Heel State and the Old North State.North Carolina is composed of 100 counties. North Carolina's two largest metropolitan areas are among the top ten fastest-growing in the country: its capital, Raleigh, and its largest city, Charlotte. In the past five decades, North Carolina's economy has undergone a transition from heavy reliance upon tobacco, textiles, and furniture-making to a more diversified economy with engineering, energy, biotechnology, and finance sectors.North Carolina has a wide range of elevations, from sea level on the coast to 6,684 feet at Mount Mitchell, the highest point in the Eastern US. The climate of the coastal plains is strongly influenced by the Atlantic Ocean. Most of the state falls in the humid subtropical climate zone   more
5 votes
0 comments
No - Voter Comments
No Comments
Vote & Comment
Leave a comment...
(Maximum 900 words)

Huntress says2015-09-07T22:14:10.2576096Z
Report Post
This site doesn't want me to vote and comment this week, so I'll have to do them separately. I play basketball, which isn't full contact like football or rugby, but it's considered a contact sport by most. I took Taekwondo classes when I was younger.