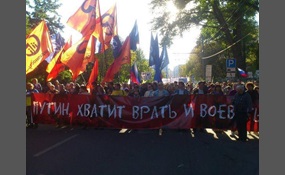 Do you support a gobal war for a peaceful world?

It is time we make the prefect world. A war without war, murdering, rape, corruption, Sex Slave, forced labor, piracy. Yet his world will not happen unless we make a gobal war on all nations that are wither corrupt, prefome mass killings of civilians, or support terrorism. I think it is time for us to create the prefect world though force. Yes people will die, yes the war may last a long time. But think of the greater good. It would be a war for humanity, and for a better tomorrow.

No we should keep our boys home. We should let them do want they want to do.

9 votes
2 comments
No we should keep our boys home. We should let them do want they want to do. - Voter Comments

None of the Above

2 votes
2 comments
None of the Above - Voter Comments

Heterodox says2015-08-09T09:30:57.2775432Z
Report Post
No such thing as a peaceful world, while we are here anyway. Humans are the most vicious beast there is. Doesn't matter how many wars we fight. Doesn't matter how many die (well unless all of us do). Given enough time we will always find something else to fight over. Even if it's the redhead that lives in the next cave over.
Vote & Comment
3
VOTING CLOSED

I support a gobal war for the reasons stated above.

1 vote
0 comments
I support a gobal war for the reasons stated above. - Voter Comments
No Comments
Vote & Comment
Leave a comment...
(Maximum 900 words)

stargate says2015-08-07T00:17:00.3561240Z
Report Post
Yes and no, as long as they do not rape people, do a mass killing of civilians, do not support terrorism, do not support piracy, and so not have high rates of corruption then it is all fine. I am fine with them beliveing in what they want to believe. I will not try to stop you unless it is doing one of the acts stated above,

stargate says2015-08-07T00:29:57.1163032Z
Report Post
I do not want to force them into a different nation. If they want to join then so be it, but I would not force them. I believe in this, I believe it is time to create a better future, it is better now then latter. This would be a world for a better tomorrow.

TBR says2015-08-07T01:00:39.1448146Z
Report Post
" I just can not turn my back on what is happening" What is happening? What is different today then at any other time? Look, there is injustice in the world. There is suffering. We don't solve these issues with bombs.

TBR says2015-08-07T04:01:39.1856298Z
Report Post
@stargate - That same noble motive has led us to kill tens of thousands of those we intend to "help". We are lousy at this, and need to just stop. We have (by some reports) killed far more than Sadam. WE are the problem, not the solution. Want a better life for women in the middle-east? Offer visas.

stargate says2015-08-07T10:42:38.3303199Z
Report Post
The onky way to stop they is by force. Those crimes will keep on happening if we do nothing. This would be yhe quicker more human option. You might not be able to bring yourself to bare seeing people die. I know people will die, but this war would not be just about us no the whole reason I think of this is for a better tomorrow. I am not talking about killing everyone, no just the ones who have crimited one of those crimes, I want to bring peace to the world yet I know this can not happen without a war on this scale. I know people will die, but I think that if we do this right we could fix this broken crazy world. If we do not do this it will continue to happen, and it will only grow in size.

stargate says2015-08-07T10:45:11.0864991Z
Report Post
Look I am not lying we have failed in some wars. But I will tell you this we could do it right. Talking will not make them back down, we need to bring the force down and make them not do these crimes. I know people will die, the war would last decades. But this is for a noble cause and that along will make me stand by what I said.

TBR says2015-08-08T01:22:11.4850535Z
Report Post
I do understand and applaud the motivation. The reality is not as simple. Even just the true morality of the question has its problems. Not the killing part, the idea that we are the world's arbitrator of what is right