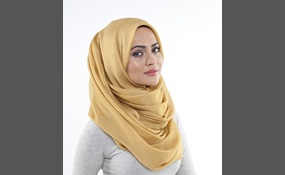 Do you think hijab oppresses women?

If it's her choice to wear it.

s_ansari says2015-04-14T01:41:23.0144771-05:00
Report Post
For starters, the hijab is the women choice, no one elses. No women would choose to make themselves opressed. Secondly, the hijab is a way to help women. In the society we live in today, women are subjected to sexual assault, harassment and even just staring. This all comes with the fact that some people can't keep their eyes off a women. The hijab enables women to cover themselves up, keeping them safe from prying eyes and lust thirsty people.

komododragon8 says2015-04-12T19:51:42.9057086-05:00
Report Post
I would consider preventing people from wearing it to be pretty oppressive as it does not negativly affect others except in certain security situations.

Yes are an English rock band who achieved success with their progressive, art, and symphonic style of rock music. They are distinguished by their use of mystical and cosmic lyrics, live stage sets and lengthy compositions, often with complex instrum... ental and vocal arrangements. The band's current line-up since February 2012 consists of singer Jon Davison, guitarist Steve Howe, bass guitarist Chris Squire, keyboardist Geoff Downes, and drummer Alan White.Squire formed Yes in 1968 with singer Jon Anderson. Squire and guitarist Peter Banks had played together in The Syn and then Mabel Greer's Toyshop. Anderson and later drummer Bill Bruford joined a line-up of Mabel Greer's Toyshop, which evolved into Yes. Keyboardist Tony Kaye completed the first Yes line-up. Their early sets were a mix of original material and cover versions.The 1970s saw Yes release the albums that are widely viewed as their creative peak: The Yes Album, Fragile, Close to the Edge, Tales from Topographic Oceans, Relayer and Going for the One   more
6 votes
3 comments
Yes - Voter Comments

reece says2015-04-12T20:05:41.6859779-05:00
Report Post
I hate to bring up the topic of slavery but many slaves didn't mind being subjected when it was the cultural norm. They just thought it was the way of life, many chose to be slaves in varies civilizations. Some things shouldn't be culturally acceptable, especially when it degrades a minority (minority as in someone that has very little power).

Roodvlees says2015-04-13T09:53:52.8873117-05:00
Report Post
The whole culture is oppressive. You control everything girls know, make them feel guilty for expressing their identity, make them feel like they morality depends on religion, drill into them that a hijab connects them to god (like he would care). And what a surprise: they 'choose' to be modest. It's like saying Putin (who controls all the media in Russia and only allows stupendous opponents) was elected fairly.

Stefy says2015-04-12T21:39:26.0174156-05:00
Report Post
If they are forced to yeah but most arent. The origin of the hijab is actually a revellion against the ancient traditional sexist societies. Islam was revolutionary in that it explicitly declared men and women spiritual and intellectual equals. At the time the purpose of a hijab was to tell people basically "Im not an object. Ficus on my brain and not on my looks." You could argue that it is outdated but most Muslims in the workd see it as a valuble part if their cultural identity and want to wear it. Especially in the US where Muslims face duscrimination, many Muslim girls i know see it as a symbol of pride for their culture and are offended when you try to make them conform to western ideas of what a wiman should have or not have in her head. Leave her alone and ket her make her own decision and quit having pointless arguments about what she should do. If you really respected woman youd leave them to make their own choice and not critisize them for it.

Renegader says2015-04-12T22:13:52.6525138-05:00
Report Post
No it is oppression because even though women may "choose" to wear one, the only reason is because they grew up with it being ingrained into their culture. It is what their mothers, and their mothers wore, so they will wear it as well.

reece says2015-04-13T02:03:20.2493144-05:00
Report Post
@Dilara firstly your character includes your body. Secondly people that are distracted away from your mentality and only focuses on your somatic aren't worth socializing with. Hiding part of yourself so the other part shines through for the scum is a horrible life to live.

Stefy says2015-04-13T05:55:31.4279239-05:00
Report Post
Again reece if you really respected women youd trust they arenintellegent enough to form their own opinions and make a decision about their body on their own. Its part of their culture and the Muslim families i know stress giving their daughters that choice.

Renegader says2015-04-13T09:34:08.3419975-05:00
Report Post
That is not his point. He is saying that their judgement comes from ancient flawed perspectives of women, where men objectify a women, so they need them to cover up for their own sake.

Dilara says2015-04-13T19:47:06.3908275-05:00
Report Post
Mormons sometimes wear certain "Mormon" clothes, jewish men wear yarmakas or heavy coats and big hats, jewish women sometimes cover their hair... Why is it only "oppression" when muslim women do it?. The point of hijab is that people won't judge you for your looks but for your actions. I am muslim and I choose not to wear it because I feel ok with showing skin. But I understand why some people don't.

Dilara says2015-04-16T19:04:35.5960841-05:00
Report Post
Reece. Not necessarily. In the bible it says to stone people to death is they work on a Sunday and it says eating shellfish is an abomination. There are horrible things in all religious books.

reece says2015-04-16T20:07:19.5928937-05:00
Report Post
@Dilara Christians don't get indoctrinated to carry out them. But anyway i was meaning the amount of people that get indoctrinated.
Privacy Policy | Terms of Use
Sitemap | View Desktop Version
©2020 Debate.org. All rights reserved.