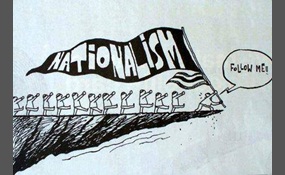 Do you think one of the listed separatist nations in the US and/or Canada should be granted independence?

Separatism is fairly common in many countries do to a variety of reasons. Some are stronger than others, but should one of them gain the independence they desire?

Quebec is a province in east-central Canada. It is the only Canadian province that has a predominantly French-speaking population, and the only one to have French as its sole provincial official language.Quebec is Canada's largest province by area a... nd its second-largest administrative division; only the territory of Nunavut is larger. It is bordered to the west by the province of Ontario, James Bay and Hudson Bay, to the north by Hudson Strait and Ungava Bay, to the east by the Gulf of Saint Lawrence and the provinces of Newfoundland and Labrador and New Brunswick. It is bordered on the south by the US states of Maine, New Hampshire, Vermont, and New York. It also shares maritime borders with Nunavut, Prince Edward Island, and Nova Scotia.Quebec is Canada's second most populous province, after Ontario. Most inhabitants live in urban areas near the Saint Lawrence River between Montreal and Quebec City, the capital. English-speaking communities and English-language institutions are concentrated in the west of the island of Montreal but are also significantly present in the Outaouais, Eastern Townships, and Gaspé regions   more
4 votes
1 comment
Québec - Voter Comments

All of the listed separatist nations should not be granted independence.
2 votes
1 comment
None - Voter Comments

Cascadia is the name of a bioregion and proposed country located within the western region of North America. Potential boundaries differ, with some drawn along existing political state and provincial lines, and others drawn along larger ecological, ... cultural, and economic boundaries.The nation would consist of Washington, Oregon, portions of other US states, and British Columbia, Canada. At its maximum extent Cascadia would extend from coastal Southeast Alaska in the north, extending into Northern California in the south, and inland to include parts of Idaho, Western Montana, Wyoming, and Yukon.As measured only by the combination of present Washington, Oregon, and British Columbia statistics, Cascadia would be home to slightly more than 15 million people, and would have an economy generating more than US$675 billion worth of goods and services annually. This number would increase significantly if portions of Northern California, Idaho, and Southern Alaska were also included. By land area Cascadia would be the 20th largest country in the world, with a land area of 534,572 sq mi, placing it right behind Mongolia. It would have a similar population to Ecuador and Guatemala   more
1 vote
1 comment
Cascadia - Voter Comments

The concept of Aztlán as the place of origin of the pre-Columbian Mexican civilization has become a symbol for various Mexican nationalist and indigenous movements. The name Aztlán was first taken up by a group of Chicano independence activists led ... by Oscar Zeta Acosta during the Chicano movement of the 1960s and 1970s. They used the name Aztlán to refer to the lands of Northern Mexico that were sold to the United States as a result of the Mexican-American War. Aztlán became a symbol for mestizo activists who believe they have a legal and primordial right to the land. In order to exercise this right, some members of the Chicano movement propose that a new nation be created, a República del Norte   more
0 votes
0 comments
Aztlán - Voter Comments
No Comments
Vote & Comment
6

The Republic of New Afrika, was an American social movement that proposed three objectives. First, the creation of an independent African-American-majority country situated in the southeastern United States. A similar claim is made for all the black... -majority counties and cities throughout the United States. Second, the payment of several billion dollars in reparations from the US government for the damages inflicted on Africans and their descendants by chattel enslavement, Jim Crow segregation, and persistent modern-day forms of racism. Third, a referendum of all African Americans in order to decide what should be done with regard to their citizenship. Regarding the latter, it was claimed that African Americans were not given a choice in this matter after emancipation. The vision for this country was first promulgated on March 31, 1968, at a Black Government Conference held in Detroit, Michigan. Its proponents lay claim to five Southern states:; and the black-majority counties adjacent to this area in Arkansas, Texas, North Carolina, Tennessee and Florida   more
0 votes
0 comments
Republic of New Afrika - Voter Comments
No Comments
Vote & Comment
7

More than one of the listed nations

If you really can't decide on one, then choose this option. I highly urge you to pick the one you want to see independent the most. I also recommend commenting which nations you can't decide on.
0 votes
0 comments
More than one of the listed nations - Voter Comments
No Comments
Vote & Comment
8

Saskatchewan is a prairie province in Canada, which has a total area of 651,900 square kilometres and a land area of 592,534 square kilometres, the remainder being water area. Saskatchewan is bordered on the west by the Province of Alberta, on the n... orth by the Northwest Territories, on the east by Manitoba, and on the south by the U.S. states of Montana and North Dakota. As of December 2013, the population of Saskatchewan was estimated at 1,114,170. Residents primarily live in the southern half of the province. Of the total population, 257,300 live in the province's largest city, Saskatoon, while 210,000 live in the provincial capital, Regina. Other major cities include Prince Albert, Moose Jaw, Yorkton, Swift Current and North Battleford.Saskatchewan was first explored by Europeans in 1690 and settled in 1774, having also been inhabited for thousands of years by various indigenous groups. It became a province in 1905, its name derived from the Saskatchewan River. The river was known as kisiskāciwani-sīpiy in the Cree language. In the early 20th century the province became known as a stronghold for Canadian democratic socialism   more
0 votes
0 comments
Saskatchewan - Voter Comments
No Comments
Vote & Comment
9

Alaska is a U.S. state situated in the northwest extremity of the North American continent. Bordering the state to the east is Yukon, a Canadian territory, and the Canadian province of British Columbia, the Arctic Ocean to the north, and the Pacific...  Ocean to the west and south, with Russia further west across the Bering Strait. Alaska is the largest state in the United States by area, the 4th least populous and the least densely populated of the 50 United States. Approximately half of Alaska's 731,449 residents live within the Anchorage metropolitan area. Alaska's economy is dominated by the oil, natural gas, and fishing industries, resources which it has in abundance. Tourism is also a significant part of the economy.Although it had been occupied for thousands of years by indigenous peoples, from the 18th century onward, European powers considered the territory of Alaska ripe for exploitation. The United States purchased Alaska from Russia on March 30, 1867, for $7.2 million at approximately two cents per acre. The area went through several administrative changes before becoming organized as a territory on May 11, 1912   more
0 votes
0 comments
Alaska - Voter Comments
No Comments
Vote & Comment
10

The Republic of Lakotah or Lakotah is a proposed homeland in North America for the Lakota.Its boundaries would be surrounded by the borders of the United States, covering thousands of square miles in North Dakota, South Dakota, Nebraska, Wyoming, an... d Montana. The proposed borders are those of the 1851 Treaty of Fort Laramie between the United States government and the Lakota   more
0 votes
0 comments
Republic of Lakotah - Voter Comments
No Comments
Vote & Comment
11

The Republic of Texas was an independent sovereign nation in North America that existed from March 2, 1836, to February 19, 1846. It was bordered by the nation of Mexico to the southwest, the Gulf of Mexico to the southeast, the two US states of Lou... isiana and Arkansas to the east and northeast, and the United States territories encompassing the current US states of Oklahoma, Kansas, Colorado, Wyoming, and New Mexico to the north and west. The citizens of the republic were known as Texians.Formed as a separate nation after gaining independence from Mexico in 1836, the republic claimed borders that included all of the present US state of Texas as well as parts of present-day Oklahoma, Kansas, Colorado, Wyoming, and New Mexico based upon the Treaties of Velasco between the newly created Texas Republic and Mexico. The eastern boundary with the United States was defined by the Adams-Onís Treaty between the United States and Spain in 1819. Its southern and western-most boundary with Mexico was under dispute throughout the entire existence of the republic with Texas claiming the boundary as the Rio Grande, and Mexico claiming the boundary as the Nueces River   more
0 votes
0 comments
Republic of Texas - Voter Comments
No Comments
Vote & Comment
12

Vermont is a state in the New England region of the northeastern United States. Vermont is the 6th smallest in area and the 2nd least populous of the 50 United States. It is the only New England state not bordering the Atlantic Ocean. Lake Champlain...  forms half of Vermont's western border, which it shares with the state of New York. The Green Mountains are within the state. Vermont is bordered by Massachusetts to the south, New Hampshire to the east across the Connecticut River, New York to the west, and the Canadian province of Quebec to the north.Originally inhabited by two major Native American tribes, much of the territory that is now Vermont was claimed by France during its early colonial period. France ceded the territory to the Kingdom of Great Britain after being defeated in 1763 in the Seven Years' War. For many years, the nearby colonies, especially New Hampshire and New York, disputed control of the area.Settlers who held land titles granted by these colonies were opposed by the Green Mountain Boys militia, which eventually prevailed in creating an independent state, the Vermont Republic   more
0 votes
0 comments
Republic of Vermont - Voter Comments
No Comments
Vote & Comment
13

When members of LDS Church (the Mormon pioneers) settled in the Salt Lake Valley near the Great Salt Lake, they wished to set up a government that would be recognized by the United States. Initially Brigham Young, President of the Church, intended t... o apply for status as a territory, and sent John Milton Bernhisel eastward to Washington, D.C. With the petition for territorial status. Realizing that California and New Mexico were applying for admission as states, Young changed his mind and decided to petition for statehood. In March 1849, realizing that they did not have time to follow the usual steps towards statehood, Young and a group of church elders quickly drafted a state constitution based on that of Iowa, where the Mormons had temporarily settled, and sent the legislative records and constitution back to that state for printing, since no printing press existed in the Great Basin at the time. They then sent a second messenger with a copy of the state's formal records and constitution to meet up with Bernhisel in Washington, D.C. And petition for statehood rather than territorial status   more
0 votes
0 comments
State of Deseret - Voter Comments
No Comments
Vote & Comment
Leave a comment...
(Maximum 900 words)