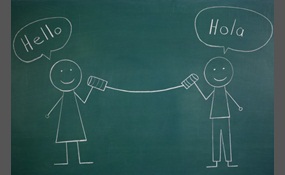 Do you think that a second language should be manditory

English is a West Germanic language that was first spoken in early medieval England and is now a global lingua franca. It is the national language of numerous sovereign states, including the United Kingdom, the United States, Canada, Australia, Irel... and, New Zealand and a number of Caribbean nations; it is an official language of almost 60 sovereign states. It is the third-most-common native language in the world, after Mandarin and Spanish. It is widely learned as a second language and is an official language of the European Union, many Commonwealth countries and the United Nations, as well as in many world organisations.English arose in the Anglo-Saxon kingdoms of England and what is now southeast Scotland. Following the extensive influence of England, Great Britain, and the United Kingdom from the 17th to mid-20th centuries through the British Empire, it has been widely propagated around the world. Through the spread of English literature, world media networks such as the BBC, the American film and television industry as well as technology, English has become the leading language of international discourse and the lingua franca in many regions   more
5 votes
1 comment
English Language - Voter Comments

Spanish, also called Castilian, is a Romance language that originated in the Castile region of Spain. Approximately 470 million people speak Spanish as a native language, making it second only to Mandarin in terms of its number of native speakers wo... rldwide. There are an estimated 548 million Spanish speakers as a first or second language, including speakers with limited competence and 20 million students of Spanish as a foreign language. Spanish is one of the six official languages of the United Nations, and it is used as an official language by the European Union, the Organization of American States, and the Union of South American Nations, among many other international organizations.Spanish is a part of the Ibero-Romance group of languages, which evolved from several dialects of common Latin in Iberia after the collapse of the Western Roman Empire in the 5th century. It was first documented in central-northern Iberia in the 9th century and gradually spread with the expansion of the Kingdom of Castile into central and southern Iberia   more
0 votes
0 comments
Spanish Language - Voter Comments
No Comments
Vote & Comment
Leave a comment...
(Maximum 900 words)

pavlovringsabell says2015-09-30T20:07:54.3870741Z
Report Post
Yes but there should be a way to opt out if you speak multiple languages fluently already
Privacy Policy | Terms of Use
Sitemap | View Desktop Version
©2020 Debate.org. All rights reserved.