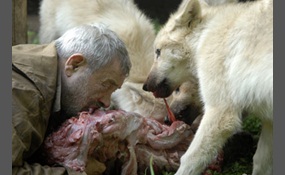 Eaten by a wolf pack or a crocodile?

Which would you rather be eaten by? Read the descriptions to help you decide.

16ft of muscle and raw power. You're in an African river being swept down stream, when you notice a large croc on the river bank, he sinks into the water and disappears. You begin crying before you're hit by what feels like a car, then suddenly dr... agged under water. Your leg is grasped in the jaws of the croc and you feel your bones snap. The croc begins its death roll and your legs is torn from your body. As you panic under the water you begin swallowing water. Cause of death: Its unclear if drowning or fright kill you first   more
5 votes
1 comment
Crocodile - Voter Comments

Alone in a large first you hear a near by howl. Scared to death you begin to run, but as you do, you notice a large pack of wolves darting towards you. Your feeble attempt at running makes you look pathetic like the fat ape you are. Before you have ... time to scream like a little girl, a wolf sinks its powerful jaws into your leg, bringing you down. You feel your leg break as the wolves bloodlust controls its attack. As if one wolf wasn't enough, the whole pack suddenly catch up and begin mauling you like a horde of hungry zombies. You hear blood curdling snarls and bones cracking as your torn apart limb from limb and being eaten alive. Your dismembered body twitches as the wolves gorge themselves on your dying body. Completely eviscerated, you finally die. Cause of death: Death by fear kills you before blood loss   more
5 votes
2 comments
Pack of hungry wolves - Voter Comments

EthicsPhilosopher says2014-05-08T08:25:38.3963058-05:00
Report Post
..... Wolves don't kill by dismemberment. They get to your neck as soon as they can and suffocate you by biting your neck.... And wolves are my favorite animal,so it would be the coolest most interesting death..... ever. :D Also, as found on many sources, there have been no recorded wolf attacks on humans..... except the 1st wolf-killing-human that has been recofrded in the US was in 2006. PEOPLE NO WOLF IS GOING TO KILL YOU!!!!!

EthicsPhilosopher says2014-05-12T08:30:33.7886057-05:00
Report Post
People, wolves kill their prey (the larger prey* by trying to bite through the jugular vain or carotid artery. The animal suffocates or quickly bleeds to death. I hatethe kind of animal that eats things alive... My worst fear is a hyena for that reason... I hate hyenas... For many reasons..... So wolves would not be my fave if they did that kind of thing.

madness says2014-05-13T14:08:08.7124847-05:00
Report Post
Unlike bears or big cats wolves do not have an anatomical weapon capable of quickly killing their prey. They begin by biting the legs and gut, until their prey collapse from exustion, then they will begin eating it, even if the animal is still alive. I've reaserched this, and wolves do not suffocate their prey.
Privacy Policy | Terms of Use
Sitemap | View Desktop Version
©2021 Debate.org. All rights reserved.