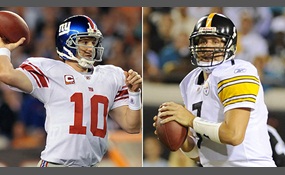 Peyton Williams Manning is an American football quarterback for the Denver Broncos of the National Football League. A five-time league MVP, he played for the Indianapolis Colts for 14 seasons from 1998 to 2011. He is a son of former NFL quarterback ... Archie Manning and an elder brother of New York Giants quarterback Eli Manning.Manning played college football for the University of Tennessee, leading the Volunteers to the 1997 SEC Championship in his senior season. However, No. 3 Tennessee lost to the No. 2 Nebraska Cornhuskers 42-17 in the Orange Bowl giving Nebraska and Tom Osborne their 3rd national championship in 4 years. He was chosen by the Indianapolis Colts with the first overall pick in the 1998 NFL Draft. Manning's playing career and statistics have ranked him among the greatest quarterbacks of all-time. From 1998 to 2010, he led the Colts to eight division championships, two AFC championships, and one Super Bowl championship. His five NFL MVPs are a league record, he was the most valuable player of Super Bowl XLI, has been named to thirteen Pro Bowls, has thirteen 4,000-yard passing seasons, and is the Indianapolis Colts' all-time leader in passing yards and touchdown passes. In 2009, he was named the best player in the NFL, and Fox Sports, along with Sports Illustrated, named him the NFL player of the decade for the 2000s. Before the 2013 season had even finished SI had named him their Sportsman of the Year   more
11 votes
1 comment
Eli Manning - Voter Comments