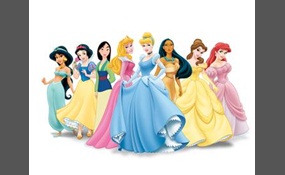 Ariel is a fictional character and the title character of Walt Disney Pictures' 28th animated film The Little Mermaid. She subsequently appears in the film's prequel television series, direct-to-video sequel The Little Mermaid II: Return to the Sea ... and direct-to-video prequel The Little Mermaid: Ariel's Beginning. Ariel is voiced by Jodi Benson in all official animated appearances and merchandise. She is 4th in the Disney Princess lineup, and the only princess to become a mother to her own child.Ariel has a very distinctive appearance, with her long, flowing, bright red hair, blue eyes, green mermaid tail and purple seashell bikini top. In the films and television series, she is the seventh-born daughter of King Triton and Queen Athena of an underwater kingdom of Merfolk. She is often rebellious, and in the first film longs to be a part of the human world. She marries Prince Eric, whom she rescued from a shipwreck, and together they have a daughter, Melody.The character is based on the title character of Hans Christian Andersen's "The Little Mermaid" story, but was developed into a different personality for the 1989 animated film adaptation   more
4 votes
0 comments
Ariel - Voter Comments
No Comments
Vote & Comment
2

Mulan is a 1998 American animated musical action-comedy-drama film produced by Walt Disney Feature Animation based on the Chinese legend of Hua Mulan. The 36th animated feature in the Walt Disney Animated Classics, it was directed by Tony Bancroft a... nd Barry Cook, with story by Robert D. San Souci and screenplay by Rita Hsiao, Philip LaZebnik, Chris Sanders, Eugenia Bostwick-Singer, and Raymond Singer. Ming-Na, Eddie Murphy, Miguel Ferrer and BD Wong star in the English version, while Jackie Chan provided his voice for the Chinese dubs of the film. The film's plot takes place during the Han Dynasty, where Fa Mulan, daughter of aged warrior Fa Zhou, impersonates a man to takes her father's place during a general conscription to counter a Hun invasion.Released during the Disney Renaissance, Mulan was the first of three features produced primarily at the Disney animation studio at Disney-MGM Studios in Orlando, Florida. Development for the film began in 1994, when a number of artistic supervisors were sent to China to receive artistic and cultural inspiration   more
4 votes
1 comment
Mulan - Voter Comments

Pocahontas is a 1995 American animated musical romance-drama film and is the 33rd animated feature in the Walt Disney Animated Classics series. It was produced by Walt Disney Feature Animation and was originally released to select theaters on June 1... 6, 1995 by Walt Disney Pictures. It belongs to the era known as the Disney Renaissance from 1989 to 1999.The film is the first animated feature Disney film to be based on a real historic character, the known history, and the folklore and legend that surrounds the Native American woman Pocahontas, and features a fictionalized account of her encounter with Englishman John Smith and the settlers that arrived from the Virginia Company.A video game based on the film was released across various platforms shortly after the film's theatrical release, and the film itself was followed by a direct-to-video sequel, Pocahontas II: Journey to a New World in 1998   more
2 votes
0 comments
Pocahontas - Voter Comments
No Comments
Vote & Comment
6

Belle is a fictional character from the TV program Once Upon a Time.
2 votes
0 comments
Belle - Voter Comments
No Comments
Vote & Comment
7

Sleeping Beauty is a 1995 American-Japanese animated film adapted from the two classic fairy tales, Sleeping Beauty by Charles Perrault by The Brothers Grimm. Originally released directly to video, the 48-minute film was produced by Jetlag Productio... ns and was distributed to DVD in 2002 by GoodTimes Entertainment as part of their "Collectible Classics" line   more
2 votes
0 comments
Sleeping Beauty - Voter Comments
No Comments
Vote & Comment
8

Cinderella is a 1950 American animated musical fantasy film produced by Walt Disney and released by RKO Radio Pictures. Based on the fairy tale "Cendrillon" by Charles Perrault, it is twelfth in the Walt Disney Animated Classics series, and was rele... ased on February 15, 1950. Directing credits go to Clyde Geronimi, Hamilton Luske and Wilfred Jackson. Songs were written by Mack David, Jerry Livingston, and Al Hoffman. Songs in the film include "A Dream Is a Wish Your Heart Makes", "Bibbidi-Bobbidi-Boo", "So This Is Love", "Sing Sweet Nightingale", "The Work Song", and "Cinderella".At the time, Walt Disney Productions had suffered from losing connections to the European film markets due the outbreak of World War II, suffering from embarrassing box office disasters like Pinocchio, Fantasia, and Bambi. The studio was over $4 million in debt and was on the verge of bankruptcy if one more slip-up were to occur. Walt Disney and his animators turned back to feature film production in 1948 after producing a string of package films with the idea of adapting of Charles Perrault's Cendrillon into a motion picture   more
1 vote
0 comments
Cinderella - Voter Comments
No Comments
Vote & Comment
9

Tiana is a fictional main character who appears in Walt Disney Pictures' 49th animated feature film The Princess and the Frog. Created by directors Ron Clements and John Musker and animated by Mark Henn, Tiana is voiced by Anika Noni Rose as an adul... t while Elizabeth M. Dampier voices the character as a child.Tiana is loosely based on Princess Emma, the heroine of E. D. Baker's novel The Frog Princess, and the princess who appears in The Brothers Grimm fairy tale by which the book was inspired. A hardworking waitress who dreams of opening her own restaurant, Tiana's progress is stalled when she transforms into a frog after desperately kissing a prince who has been turned into one by an evil witch doctor. The 9th Disney Princess, Tiana is the first to be of African American heritage.Tiana has been mostly positively received, with critics praising her personality and values. However, Tiana's ethnicity has been met with mixed reception, driven by speculation and controversy   more
1 vote
0 comments
Tiana - Voter Comments
No Comments
Vote & Comment
10

Sofia the First is an American-British-Spanish-French computer-animated television series that incorporates characters from the Disney Princess franchise. The series stars Ariel Winter as Sofia, a young girl who becomes a princess when her mother, M... iranda, marries King Roland II of the kingdom of Enchancia. It features songs written by John Kavanaugh and Erica Rothschild and music directed by Richard M. Sherman.Craig Gerber, who created this Disney Junior TV series, is also responsible for writing the Disneytoon Studios Tinker Bell film The Pirate Fairy.The series' 60-minute pilot episode, "Once Upon a Princess" premiered on November 18, 2012 on Disney Channel. The series itself premiered on January 11, 2013 on Disney Channel during its Disney Junior block. Disney Junior renewed Sofia the First for a second season on March 5, 2013, and then for a third season on January 8, 2014. The show's second TV movie, "The Floating Palace", aired on November 24, 2013   more
0 votes
0 comments
Sofia the First - Voter Comments
No Comments
Vote & Comment
Leave a comment...
(Maximum 900 words)