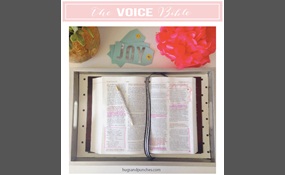 The New King James Version is a modern translation of the Bible published by Thomas Nelson, Inc. The New Testament was published in 1979, the Psalms in 1980, and the full Bible in 1982. It took a total of 7 years to complete. The anglicized edition ... was originally known as the Revised Authorized Version, but the NKJV title is now used universally   more
1 vote
1 comment
New King James Version - Voter Comments

I don't read the Bible

The New International Version is an English translation of the Christian Bible. Biblica is the worldwide publisher and copyright holder of the NIV, and licenses commercial rights to Zondervan in the United States and to Hodder & Stoughton in the UK....  Originally published in the 1970s, the NIV was updated in 1984 and 2011, and has become one of the most popular modern translations   more
0 votes
0 comments
New International Version - Voter Comments
No Comments
Vote & Comment
8

The King James Version, commonly known as the Authorized Version or King James Bible, is an English translation of the Christian Bible for the Church of England begun in 1604 and completed in 1611. First printed by the King's Printer Robert Barker, ... this was the third translation into English to be approved by the English Church authorities. The first was the Great Bible commissioned in the reign of King Henry VIII, and the second was the Bishops' Bible of 1568. In January 1604, King James VI and I convened the Hampton Court Conference where a new English version was conceived in response to the perceived problems of the earlier translations as detected by the Puritans, a faction within the Church of England.James gave the translators instructions intended to guarantee that the new version would conform to the ecclesiology and reflect the episcopal structure of the Church of England and its belief in an ordained clergy. The translation was done by 47 scholars, all of whom were members of the Church of England   more
0 votes
0 comments
King James Version - Voter Comments
No Comments
Vote & Comment
Leave a comment...
(Maximum 900 words)