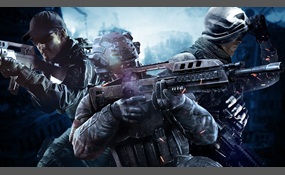 Call of Duty: Black Ops is a 2010 first-person shooter video game. The game was developed by Treyarch, published by Activision, and released worldwide on November 9, 2010 for Microsoft Windows, PlayStation 3, Xbox 360, and Wii consoles, with a separ... ate version for Nintendo DS developed by n-Space. Announced on April 30, 2010, the game is the seventh installment of the Call of Duty series. It is also the first to be set in the Cold War and the fifth to be set in World War II. It is the third in the series to be developed by Treyarch, and is connected to the developer's Call of Duty: World at War.Within 24 hours of going on sale, the game had sold more than 5.6 million copies, 4.2 million in the U.S. and 1.4 million in the UK, breaking the record set by its predecessor Modern Warfare 2 by some 2.3 million copies. Capcom released a subtitled version in Japan on November 18, 2010 and later a Japanese-dubbed version on December 16, 2010. After six weeks on release, Activision reported that Black Ops had exceeded $1 billion in sales   more
4 votes
0 comments
Call of Duty: Black Ops - Voter Comments
No Comments
Vote & Comment
2

Call of Duty: Modern Warfare 3 is a 2011 first-person shooter video game, developed by Infinity Ward and Sledgehammer Games, with Raven Software having assisted in development and published by Activision. It is the third installment in the Modern Wa... rfare saga, a direct sequel to 2009's Call of Duty: Modern Warfare 2, and the eighth Call of Duty installment.The game was released on November 8, 2011 in North America on Microsoft Windows, Xbox 360, PlayStation 3, and Wii, with a separate version for Nintendo DS developed by n-Space. In Australia, the Wii version was released on November 23, 2011. In Japan, Square Enix handled the installment with a separate subtitled and dubbed version, as they did for Call of Duty: Black Ops, released November 17, 2011 and December 22, 2011 respectively. Within 24 hours of going on sale, the game sold 6.5 million copies in the U.S. and UK alone and grossed $400 million, making it the biggest entertainment launch of all time, until it was surpassed by the next Call of Duty title, Call of Duty: Black Ops II in November 2012 with $500 million. As of November 5, 2013, Modern Warfare 3 has sold 26.5 million copies   more
3 votes
0 comments
Call of Duty: Modern Warfare 3 - Voter Comments
No Comments
Vote & Comment
3

Call of Duty: Advanced Warfare is a 2014 first-person shooter video game developed by Sledgehammer Games and published by Activision. It was released on November 4, 2014 for Microsoft Windows, PlayStation 3, PlayStation 4, Xbox 360, and Xbox One. Th... e game is the first main entry in the Call of Duty series since 2013's Call of Duty: Ghosts.The single-player story follows Jack Mitchell, a private in the United States Marine Corps. Development began in 2011, soon after the release of Call of Duty: Modern Warfare 3. Sledgehammer engaged veteran actors, such as Troy Baker and Kevin Spacey, to perform in the game's lead roles   more
2 votes
1 comment
Call of Duty: Advanced Warfare - Voter Comments

Call of Duty: Black Ops II is a 2012 first-person shooter video game, developed by Treyarch and published by Activision. Unlike Battlefield 4 it is an arcade shooter game. It was released on November 13, 2012 for Microsoft Windows, PlayStation 3, an... d Xbox 360 and on November 18, 2012 in North America, November 30, 2012 in Europe and Australia for the Wii U. Square Enix released the game for the Japanese market on November 22, 2012 as a subbed version. A Japanese voice-dubbed version was released separately on December 20, 2012. The script for this version was translated by Zenigame Nakamoto.The Japanese release of the Wii U port is only the dubbed version since the console was not available in Japan in November. Black Ops II is the ninth game in the Call of Duty franchise of video games and a sequel to the 2010 game Call of Duty: Black Ops. The game was launched at 16,000 stores worldwide at midnight on November 13, 2012.Black Ops II is the first game in the Call of Duty franchise to feature future warfare technology and the first to present branching storylines driven by player choice as well as selecting weapons before starting story mode missions   more
2 votes
0 comments
Call of Duty: Black Ops II - Voter Comments
No Comments
Vote & Comment
5

Black op 3 when it comes out

None I play Battlefield only

2 votes
2 comments
None I play Battlefield only - Voter Comments

Call of Duty: Ghosts is a 2013 first-person shooter video game developed by Infinity Ward, with assistance from Raven Software, Neversoft and Certain Affinity. Published by Activision, it is the tenth primary installment in the Call of Duty series a... nd the sixth developed by Infinity Ward. The video game was released for Microsoft Windows, PlayStation 3, Xbox 360, and Wii U on November 5, 2013, with Treyarch handling the port for the Wii U. The game was released with the launch of next-generation consoles PlayStation 4 and Xbox One.According to review score aggregator Metacritic, Ghosts received mixed to positive reviews from critics, with most praising its multiplayer gameplay and introduction of the new game mode Extinction, but criticizing it for its single-player campaign, rehashing of familiar concepts and general lack of innovation   more
1 vote
0 comments
Call of Duty: Ghosts - Voter Comments
No Comments
Vote & Comment
9

Call of Duty 2 is a 2005 first-person shooter video game and the second installment in the critically acclaimed Call of Duty series. It was developed by Infinity Ward and published by Konami in Japan and Activision in the rest of the world. The game...  was released on October 25, 2005 for Microsoft Windows PCs and on November 22, 2005 as a launch game for the Xbox 360 in Europe, Australia and South America, and later in Japan. Other versions were released on other platforms, including mobile phones as well as Pocket PCs.The game is set during World War II and the campaign mode is experienced through the perspectives of four soldiers: one in the Red Army, one in the United States Army, and two in the British Army. It contains four individual campaigns, split into three stories, with a total of twenty-seven missions. Activision officially announced the game on April 7, 2005 in a press release. Many features were added and changed from the original Call of Duty. The most notable change is the regenerating health. Additions include an icon that indicates a nearby grenade about to explode.The game was met with positive reception   more
1 vote
0 comments
Call of Duty 2 - Voter Comments
No Comments
Vote & Comment
11

Call of Duty is a 2003 first-person shooter video game developed by Infinity Ward and published by Activision. The game simulates the infantry and combined arms warfare of World War II. The game is based on the Quake III: Team Arena engine. It was a... ccompanied in September 2004 by an expansion pack, Call of Duty: United Offensive, which was produced by Activision, and developed by Gray Matter Interactive, with contributions from Pi Studios. Call of Duty is similar in theme and gameplay to Medal of Honor, as it is made out of single-player campaigns and missions. However, unlike Medal of Honor, the war is seen not just from the viewpoint of an American soldier but also from the viewpoint of British, Canadian, and Soviet soldiers.The game was somewhat unusual at the time in that throughout the single-player mode the player is joined by computer-controlled allies who range in quantity from two infantrymen to an entire regiment of tanks. The computer-controlled allies will support the actual player during the missions   more
0 votes
0 comments
Call of Duty - Voter Comments
No Comments
Vote & Comment
12

Call of Duty 2: Big Red One

Call of Duty 2: Big Red One is a 2005 first-person shooter video game. It was released for the GameCube, PlayStation 2, and Xbox on November 1, 2005 in North America, November 18, 2005 in Europe, and June 29, 2006 in Japan for the PS2 only.Big Red O... ne differs from other games in the Call of Duty franchise in that it focuses on a single Allied formation in World War II: the U.S. Army's 1st Infantry Division, which goes by the nickname Big Red One due to their unit patch which features a large red numeral one. The game covers the division's part in the invasion and liberation of North Africa, the invasion into Sicily, the landing on Omaha Beach in Europe and moving east, and eventually crossing the Siegfried Line into Germany. Each chapter is book-ended with period footage from the Military Channel, with voiceovers courtesy of Mark Hamill, imitating a World War II documentary.The game features several actors from the HBO miniseries Band of Brothers, including Michael Cudlitz, James Madio, Frank John Hughes, Richard Speight, Jr., Ross McCall, Rick Gomez, and Rene Morono. The box cover features actor Stephen Saux   more
0 votes
0 comments
Call of Duty 2: Big Red One - Voter Comments
No Comments
Vote & Comment
14