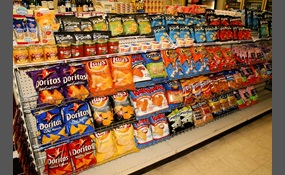 Lay's is the brand name for a number of potato chip varieties as well as the name of the company that founded the chip brand in 1932. Lay's has been owned by PepsiCo since 1965. Other brands in the Frito-Lay group include Fritos, Doritos, Ruffles, C... heetos, Rold Gold pretzels, Munchos, Funyuns, and Sun Chips   more
2 votes
0 comments
Lay's - Voter Comments
No Comments
Vote & Comment
3

Kettle Foods is an international manufacturer of potato chips, tortilla chips, and nut butters based in Salem, Oregon, United States, with a European and Middle East headquarters in Norwich, United Kingdom. As of 2006 they are the largest natural po... tato chip brand in the U.S. The company, founded in 1978 by Cameron Healy, has been owned by Diamond Foods since 2010   more
2 votes
1 comment
Kettle Foods - Voter Comments

Fritos is the name of a brand of corn chips invented in the 1930s by Charles Elmer Doolin and produced since 1959 by Frito-Lay. They are made from a deep-fried extrusion of masa.
0 votes
0 comments
Fritos - Voter Comments
No Comments
Vote & Comment
Leave a comment...
(Maximum 900 words)