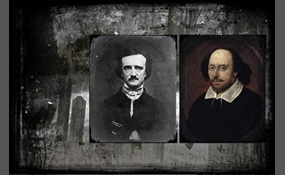 Edgar Allan Poe was an American author, poet, editor, and literary critic, considered part of the American Romantic Movement. Best known for his tales of mystery and the macabre, Poe was one of the earliest American practitioners of the short story,...  and is generally considered the inventor of the detective fiction genre. He is further credited with contributing to the emerging genre of science fiction. He was the first well-known American writer to try to earn a living through writing alone, resulting in a financially difficult life and career.Born in Boston, he was the second child of two actors. His father abandoned the family in 1810, and his mother died the following year. Thus orphaned, the child was taken in by John and Frances Allan, of Richmond, Virginia. Although they never formally adopted him, Poe was with them well into young adulthood. Tension developed later as John Allan and Edgar repeatedly clashed over debts, including those incurred by gambling, and the cost of secondary education for the young man. Poe attended the University of Virginia for one semester but left due to lack of money   more
4 votes
0 comments
Edgar Allan Poe - Voter Comments
No Comments
Vote & Comment
2

Sylvia Plath was an American poet, novelist, and short-story writer. Born in Boston, Massachusetts, she studied at Smith College and Newnham College at the University of Cambridge, before receiving acclaim as a poet and writer. She married fellow po... et Ted Hughes in 1956; they lived together in the United States and then England, and had two children, Frieda and Nicholas. Plath suffered from depression for much of her adult life, and in 1963 she committed suicide. Controversy continues to surround the events of her life and death, as well as her writing and legacy.Plath is credited with advancing the genre of confessional poetry and is best known for her two published collections, The Colossus and Other Poems and Ariel. In 1982, she won a posthumous Pulitzer Prize for The Collected Poems. She also wrote The Bell Jar, a semi-autobiographical novel published shortly before her death   more
2 votes
1 comment
Sylvia Plath - Voter Comments

Elizabeth Barrett Browning was one of the most prominent English poets of the Victorian era. Her poetry was widely popular in both Britain and the United States during her lifetime.Born in County Durham, the eldest of 12 children, Browning was educa... ted at home. She wrote poetry from around the age of six and this was compiled by her mother, comprising what is now one of the largest collections extant of juvenilia by any English writer. At 15 Browning became ill, suffering from intense head and spinal pain for the rest of her life, rendering her frail. She took laudanum for the pain, which may have led to a lifelong addiction and contributed to her weak health.In the 1830s Barrett's cousin John Kenyon introduced her to prominent literary figures of the day such as William Wordsworth, Mary Russell Mitford, Samuel Taylor Coleridge; Alfred, Lord Tennyson, and Thomas Carlyle. Browning's first adult collection The Seraphim and Other Poems was published in 1838. During this time she contracted a disease, possibly tuberculosis, which weakened her further. Living at Wimpole Street, in London, Browning wrote prolifically between 1841 and 1844, producing poetry, translation and prose   more
1 vote
1 comment
Elizabeth Barrett Browning - Voter Comments

Emily Elizabeth Dickinson was an American poet. Born in Amherst, Massachusetts, to a successful family with strong community ties, she lived a mostly introverted and reclusive life. After she studied at the Amherst Academy for seven years in her you... th, she spent a short time at Mount Holyoke Female Seminary before returning to her family's house in Amherst. Thought of as an eccentric by the locals, she became known for her penchant for white clothing and her reluctance to greet guests or, later in life, even leave her room. Most of her friendships were therefore carried out by correspondence.While Dickinson was a prolific private poet, fewer than a dozen of her nearly eighteen hundred poems were published during her lifetime. The work that was published during her lifetime was usually altered significantly by the publishers to fit the conventional poetic rules of the time. Dickinson's poems are unique for the era in which she wrote; they contain short lines, typically lack titles, and often use slant rhyme as well as unconventional capitalization and punctuation. Many of her poems deal with themes of death and immortality, two recurring topics in letters to her friends   more
1 vote
0 comments
Emily Dickinson - Voter Comments
No Comments
Vote & Comment
5

William Shakespeare was an English poet, playwright and actor, widely regarded as the greatest writer in the English language and the world's pre-eminent dramatist. He is often called England's national poet and the "Bard of Avon". His extant works,...  including some collaborations, consist of about 38 plays, 154 sonnets, two long narrative poems, and a few other verses, the authorship of some of which is uncertain. His plays have been translated into every major living language and are performed more often than those of any other playwright.Shakespeare was born and brought up in Stratford-upon-Avon. At the age of 18, he married Anne Hathaway, with whom he had three children: Susanna, and twins Hamnet and Judith. Between 1585 and 1592, he began a successful career in London as an actor, writer, and part-owner of a playing company called the Lord Chamberlain's Men, later known as the King's Men. He appears to have retired to Stratford around 1613 at age 49, where he died three years later   more
0 votes
0 comments
William Shakespeare - Voter Comments
No Comments
Vote & Comment
6

Ralph Waldo Emerson was an American essayist, lecturer, and poet, who led the Transcendentalist movement of the mid-19th century. He was seen as a champion of individualism and a prescient critic of the countervailing pressures of society, and he di... sseminated his thoughts through dozens of published essays and more than 1,500 public lectures across the United States.Emerson gradually moved away from the religious and social beliefs of his contemporaries, formulating and expressing the philosophy of Transcendentalism in his 1836 essay, Nature. Following this ground-breaking work, he gave a speech entitled "The American Scholar" in 1837, which Oliver Wendell Holmes, Sr. Considered to be America's "Intellectual Declaration of Independence".Emerson wrote most of his important essays as lectures first, then revised them for print. His first two collections of essays – Essays: First Series and Essays: Second Series, published respectively in 1841 and 1844 – represent the core of his thinking, and include such well-known essays as Self-Reliance, The Over-Soul, Circles, The Poet and Experience   more
0 votes
0 comments
Ralph Waldo Emerson - Voter Comments
No Comments
Vote & Comment
7

Christina Georgina Rossetti was an English poet who wrote a variety of romantic, devotional, and children's poems. She is perhaps best known for her long poem Goblin Market, her love poem Remember, and for the words of the Christmas carol In the Ble... ak Midwinter   more
0 votes
0 comments
Christina Rossetti - Voter Comments
No Comments
Vote & Comment
8

Elizabeth Cleghorn Gaskell, née Stevenson, often referred to simply as Mrs Gaskell, was a British novelist and short story writer during the Victorian era. Her novels offer a detailed portrait of the lives of many strata of society, including the ve... ry poor, and are of interest to social historians as well as lovers of literature. Gaskell was also the first to write a biography of Charlotte Bronte, The Life of Charlotte Bronte, which was published in 1857   more
0 votes
0 comments
Elizabeth Gaskell - Voter Comments
No Comments
Vote & Comment
9

Sir Walter Scott, 1st Baronet, FRSE was a Scottish historical novelist, playwright, and poet.Scott was the first English-language author to have a truly international career in his lifetime, with many contemporary readers in Europe, Australia, and N... orth America. His novels and poetry are still read, and many of his works remain classics of both English-language literature and of Scottish literature. Famous titles include Ivanhoe, Rob Roy, The Lady of the Lake, Waverley, The Heart of Midlothian and The Bride of Lammermoor.Although primarily remembered for his extensive literary works and his political engagement, Scott was an advocate, judge and legal administrator by profession, and throughout his career combined his writing and editing work with his daily occupation as Clerk of Session and Sheriff-Depute of Selkirkshire.A prominent member of the Tory establishment in Edinburgh, Scott was an active member of the Highland Society and served a long term as President of the Royal Society of Edinburgh   more
0 votes
0 comments
Sir Walter Scott - Voter Comments
No Comments
Vote & Comment
No comments yet.
Leave a comment...
(Maximum 900 words)
Privacy Policy | Terms of Use
Sitemap | View Desktop Version
©2020 Debate.org. All rights reserved.