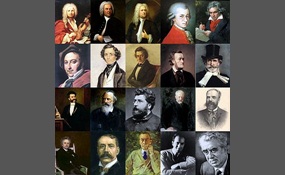 Ludwig van Beethoven was a German composer and pianist. A crucial figure in the transition between the Classical and Romantic eras in Western art music, he remains one of the most famous and influential of all composers. His best-known compositions ... include 9 symphonies, 5 concertos for piano, 32 piano sonatas, and 16 string quartets. He also composed other chamber music, choral works, and songs.Born in Bonn, then the capital of the Electorate of Cologne and part of the Holy Roman Empire, Beethoven displayed his musical talents at an early age and was taught by his father Johann van Beethoven and by Christian Gottlob Neefe. During his first 22 years in Bonn, Beethoven intended to study with Wolfgang Amadeus Mozart and befriended Joseph Haydn. Beethoven moved to Vienna in 1792 and began studying with Haydn, quickly gaining a reputation as a virtuoso pianist. He lived in Vienna until his death. In about 1800 his hearing began to deteriorate, and by the last decade of his life he was almost totally deaf. He gave up conducting and performing in public but continued to compose; many of his most admired works come from this period   more
6 votes
1 comment
Ludwig van Beethoven - Voter Comments

Wolfgang Amadeus Mozart, baptised as Johannes Chrysostomus Wolfgangus Theophilus Mozart, was a prolific and influential composer of the Classical era.Mozart showed prodigious ability from his earliest childhood. Already competent on keyboard and vio... lin, he composed from the age of five and performed before European royalty. At 17, he was engaged as a court musician in Salzburg, but grew restless and travelled in search of a better position, always composing abundantly. While visiting Vienna in 1781, he was dismissed from his Salzburg position. He chose to stay in the capital, where he achieved fame but little financial security. During his final years in Vienna, he composed many of his best-known symphonies, concertos, and operas, and portions of the Requiem, which was largely unfinished at the time of his death. The circumstances of his early death have been much mythologized. He was survived by his wife Constanze and two sons.He composed over 600 works, many acknowledged as pinnacles of symphonic, concertante, chamber, operatic, and choral music   more
2 votes
1 comment
Wolfgang Amadeus Mozart - Voter Comments

Johann Sebastian Bach was a German composer and musician of the Baroque period. He enriched established German styles through his skill in counterpoint, harmonic and motivic organisation, and the adaptation of rhythms, forms, and textures from abroa... d, particularly from Italy and France. Bach's compositions include the Brandenburg concertos, the Mass in B minor, The Well-Tempered Clavier, two Passions, keyboard works, and more than 300 cantatas, of which nearly 100 cantatas have been lost to posterity. His music is revered for its intellectual depth, technical command, and artistic beauty.Bach was born in Eisenach, Saxe-Eisenach, into a great musical family; his father, Johann Ambrosius Bach, was the director of the town musicians, and all of his uncles were professional musicians. His father probably taught him to play violin and harpsichord, and his brother, Johann Christoph Bach, taught him the clavichord and exposed him to much contemporary music. Apparently at his own initiative, Bach attended St Michael's School in Lüneburg for two years   more
1 vote
0 comments
Johann Sebastian Bach - Voter Comments
No Comments
Vote & Comment
4

Frédéric François Chopin, born Fryderyk Franciszek Chopin, was a Polish composer and virtuoso pianist of the Romantic era, who wrote primarily for the solo piano. He gained and has maintained renown worldwide as one of the leading musicians of his e... ra, whose "poetic genius was based on a professional technique that was without equal in his generation." Chopin was born in what was then the Duchy of Warsaw, and grew up in Warsaw, which after 1815 became part of Congress Poland. A child prodigy, he completed his musical education and composed many of his works in Warsaw before leaving Poland, aged 20, less than a month before the outbreak of the November 1830 Uprising.At the age of 21 he settled in Paris, obtaining French citizenship in 1835. During the last 18 years of his life, he gave only some 30 public performances, preferring the more intimate atmosphere of the salon. He supported himself by selling his compositions and teaching piano, for which he was in high demand. Chopin formed a friendship with Franz Liszt and was admired by many of his musical contemporaries, including Robert Schumann   more
1 vote
0 comments
Frédéric Chopin - Voter Comments
No Comments
Vote & Comment
5

Pyotr Ilyich Tchaikovsky, often anglicised as Peter Ilyich Tchaikovsky, was a Russian composer whose works included symphonies, concertos, operas, ballets, chamber music, and a choral setting of the Russian Orthodox Divine Liturgy. Some of these are...  among the most popular theatrical music in the classical repertoire. He was the first Russian composer whose music made a lasting impression internationally, which he bolstered with appearances as a guest conductor later in his career in Europe and the United States. One of these appearances was at the inaugural concert of Carnegie Hall in New York City in 1891. Tchaikovsky was honored in 1884 by Emperor Alexander III, and awarded a lifetime pension in the late 1880s.Although musically precocious, Tchaikovsky was educated for a career as a civil servant. There was scant opportunity for a musical career in Russia at that time, and no system of public music education. When an opportunity for such an education arose, he entered the nascent Saint Petersburg Conservatory, from which he graduated in 1865   more
1 vote
1 comment
Pyotr Ilyich Tchaikovsky - Voter Comments

Achille-Claude Debussy was a French composer. Along with Maurice Ravel, he was one of the most prominent figures associated with Impressionist music, though he himself intensely disliked the term when applied to his compositions. In France, he was m... ade Chevalier of the Legion of Honour in 1903. Debussy was among the most influential composers of the late 19th and early 20th centuries, and his use of non-traditional scales and chromaticism influenced many composers who followed.Debussy's music is noted for its sensory content and frequent eschewing of tonality. The French literary style of his period was known as Symbolism, and this movement directly inspired Debussy both as a composer and as an active cultural participant   more
1 vote
1 comment
Claude Debussy - Voter Comments

Franz Peter Schubert was an Austrian composer.Despite having died at age thirty-one, Schubert was extremely prolific. His output consists of over six hundred secular vocal works, seven complete symphonies, sacred music, operas, incidental music and ... a large body of chamber and piano music. Appreciation of his music while he was alive was limited to a relatively small circle of admirers in Vienna, but interest in his work increased significantly in the decades following his death. Felix Mendelssohn, Robert Schumann, Franz Liszt, Johannes Brahms and other 19th-century composers discovered and championed his works. Today, Schubert is ranked among the greatest composers of the early Romantic era and, as such, is one of the most frequently performed composers of the early nineteenth century   more
0 votes
0 comments
Franz Schubert - Voter Comments
No Comments
Vote & Comment
Leave a comment...
(Maximum 900 words)