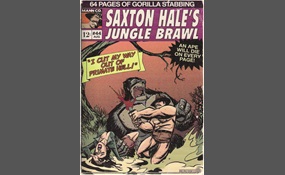 No manga, please. Except maybe Yotsuba&!

Calvin and Hobbes is a daily comic strip by American cartoonist Bill Watterson that was syndicated from November 18, 1985 to December 31, 1995. It follows the humorous antics of Calvin, a precocious, mischievous, and adventurous six-year-old boy, an... d Hobbes, his sardonic stuffed tiger. The pair is named after John Calvin, a 16th-century French Reformation theologian, and Thomas Hobbes, a 17th-century English political philosopher. At the height of its popularity, Calvin and Hobbes was featured in over 2,400 newspapers worldwide. As of January 2010, reruns of the strip still appear in more than 50 countries. Nearly 45 million copies of the 18 Calvin and Hobbes books have been sold.Calvin and Hobbes is set in the contemporary United States in an unspecified suburban area. The strip depicts Calvin's flights of fancy and his friendship with Hobbes. It also examines Calvin's relationships with family and classmates. Hobbes' dual nature is a defining motif for the strip: to Calvin, Hobbes is a live anthropomorphic tiger; all the other characters see him as an inanimate stuffed toy   more
3 votes
0 comments
Calvin and Hobbes - Voter Comments
No Comments
Vote & Comment
2

Jericho Season 3: Civil War is a comic book limited series of six issues that continues the storyline of the CBS television show Jericho. It was written by Jason M. Burns and the Jericho writing team.On March 12, 2009, Devil's Due Publishing announc... ed that all storylines from the TV series will be continued in a comic book series. On November 25, 2009, Devil's Due Publishing released the first issue of the six-issue continuation of the Jericho saga. As of May 29, 2011, IDW Publishing has re-released the first 3 comics as Jericho: Redux, as well as issues 4, 5 and 6, thus completing its publication.In August 2011, IDW collected all 6 comics into a 144-page graphic novel entitled Jericho Season 3: Civil War   more
0 votes
0 comments
Jericho Season 3: Civil War - Voter Comments
No Comments
Vote & Comment
4

Bone is an independently published comic book series, written and illustrated by Jeff Smith, originally serialized in 55 irregularly released issues from 1991 to 2004. It follows the three Bone cousins, Fone, Phoney, and Smiley as they try to find t... heir way back to their home of Boneville and out of a mysterious village   more
0 votes
0 comments
Bone (series) - Voter Comments
No Comments
Vote & Comment
5

Schlock Mercenary is a comedic webcomic written and drawn by Howard Tayler. It follows the tribulations of a star-travelling mercenary company in a satiric, mildly dystopian 31st-century space opera setting. Since its debut on June 12, 2000 the comi... c has updated daily, begun to support its author, and been nominated for four Hugo Awards   more
0 votes
0 comments
Schlock Mercenary - Voter Comments
No Comments
Vote & Comment
6

Xkcd, sometimes stylized as XKCD, is a webcomic created by Randall Munroe. The comic's tagline describes it as a "A webcomic of romance, sarcasm, math, and language". Munroe states on the comic's website that the name of the comic is not an acronym ... but "just a word with no phonetic pronunciation".The subject matter of the comic varies from statements on life and love to mathematical and scientific in-jokes. Some strips feature simple humor or pop-culture references. Although it has a cast of stick figures, the comic occasionally features landscapes, intricate mathematical patterns such as fractals, intricate graphs and charts, or imitations of the style of other cartoonists.Xkcd is available under the Creative Commons Attribution-NonCommercial 2.5 License. New comics are added three times a week, on Mondays, Wednesdays, and Fridays, although on some occasions they have been updated every weekday.Since July 2012, there has been a branch of xkcd called xkcd What-If, which answers unusual reader-submitted science questions in a light-hearted but scientifically grounded way. What If? Is presented in the format of an article rather than a comic strip   more
0 votes
0 comments
Xkcd - Voter Comments
No Comments
Vote & Comment
7

Turn Signals on a Land Raider

The Order of the Stick

The Order of the Stick is a comedic webcomic that satirizes tabletop role-playing games and medieval fantasy. The comic is written and drawn by Rich Burlew, who illustrates the comic in a stick figure style.Taking place in a magical world that loose... ly operates by the rules of the 3.5 edition of the role-playing game Dungeons and Dragons, the comic follows the sometimes farcical exploits of six adventurers as they strive to save the world from an evil lich sorcerer. Much of the comic's humor stems from the characters' awareness of the game rules that affect their lives or from having anachronistic knowledge of modern culture. This in turn is often used by the author to parody various aspects of role-playing games and fantasy fiction. While primarily comedic in nature, The Order of the Stick features a continuing storyline serialized in one- to four-page episodes, with over 900 such episodes released so far.Although it is principally distributed online through the website Giant in the Playground, seven book collections have been published, including several print-only stories   more
0 votes
0 comments
The Order of the Stick - Voter Comments
No Comments
Vote & Comment
9

Dilbert is an American comic strip written and illustrated by Scott Adams. First published on April 16, 1989, Dilbert is known for its satirical office humor about a white-collar, micromanaged office featuring the engineer Dilbert as the title chara... cter. The strip has spawned several books, an animated television series, a video game, and hundreds of Dilbert-themed merchandise items. Dilbert Future and The Joy of Work are among the most read books in the series. Adams received the National Cartoonist Society Reuben Award in 1997 and the Newspaper Comic Strip Award in the same year for his work on the strip. Dilbert appears online and in 2000 newspapers worldwide in 65 countries and 25 languages   more
0 votes
0 comments
Dilbert - Voter Comments
No Comments
Vote & Comment
10

Yotsuba&! Is an ongoing Japanese comedy manga series by Kiyohiko Azuma, the creator of Azumanga Daioh. It is published in Japan by ASCII Media Works, formerly MediaWorks, in the monthly magazine Dengeki Daioh and collected in twelve tankōbon volumes...  as of March 2013. It depicts the everyday adventures of a young girl named Yotsuba as she learns about the world around her, guided by her father, the neighbors, and their friends. Several characters in Yotsuba&! Were previously featured in a one-shot manga called "Try! Try! Try!" The phrase Yotsuba to means "Yotsuba and," a fact reflected in the chapter titles, most of which take the form "Yotsuba and [something]."The manga was licensed for English-language distribution by ADV Manga, which released five volumes between 2005 and 2007. Volume six was supposed to have been released in February 2008, but was delayed indefinitely in order to focus on ADV's core business of anime. At New York Comic Con 2009, Yen Press announced that it had acquired the North American license for the series; it reprinted the first five volumes with new translations along with volume six in September 2009, and is continuing with later volumes   more
0 votes
0 comments
Yotsuba&! - Voter Comments
No Comments
Vote & Comment
12

If you know, you already do. If you don't, you do not want to know.
0 votes
0 comments
Javascript:void(0); - Voter Comments
No Comments
Vote & Comment
13

Something by Archie Comics

Archie Comic Publications, Inc. Is an American comic book publisher headquartered in the village of Mamaroneck, New York, The comic is known for its many series featuring the fictional teenagers Archie Andrews, Betty Cooper, Veronica Lodge, Reggie M... antle, and Jughead Jones. The characters were created by publisher/editor John L. Goldwater, written by Vic Bloom, and drawn by Bob Montana. They were based in part on people met by Goldwater "in the Midwest" during his travels throughout the United States while looking for jobs and places to stay.Archie's first appearance in Pep Comics #22 on December 22, 1941, was drawn by Montana and written by Vic Bloom. With the creation of Archie, publisher Goldwater hoped to appeal to fans of the Andy Hardy movies starring Mickey Rooney. Archie Comics is also the title of the company's longest-running publication, the first issue appearing with a cover date of Winter 1942. Starting with issue #114, the title was shortened to simply Archie   more
0 votes
0 comments
Something by Archie Comics - Voter Comments
No Comments
Vote & Comment
Leave a comment...
(Maximum 900 words)