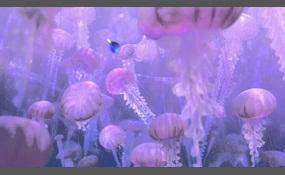 The Portuguese man o' war, also known as the Portuguese man-of-war, man-of-war, or bluebottle is a marine cnidarian of the family Physaliidae. Its venomous tentacles can deliver a painful sting.Despite its outward appearance, the Portuguese man o' w... ar is not a common jellyfish but a siphonophore, which is not actually a single multicellular organism, but a colony of specialized minute individuals called zooids. These zooids are attached to one another and physiologically integrated to the extent that they are incapable of independent survival   more
3 votes
0 comments
Portuguese man o' war - Voter Comments
No Comments
Vote & Comment
3