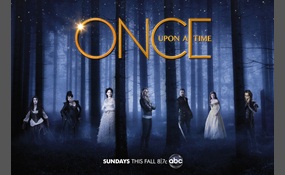 Favorite Once Upon a Time Character

Once there was a miller who was poor, but who had a beautiful daughter. Now it happened that he had to go and speak to the king, and in order to make himself appear important, he said to him, ""I have a daughter who can spin straw into gold.""The ki... ng said to the miller, ""That is an art which pleases me well. If your daughter is as clever as you say, bring her to-morrow to my palace and I will put her to the test.""And when the girl was brought to him, he took her into a room which was quite full of straw, gave her a spinning-wheel and a reel, and said, ""Now set to work, and if by tomorrow morning early you have not spun this straw into gold during the night, you must die."" Thereupon he himself locked up the room, and left her in it alone.So there sat the poor miller's daughter, and for the life of her, could not tell what to do, she had no idea how straw could be spun into gold, and she grew more and more frightened, until at last she began to weep.But all at once the door opened, a   more
3 votes
1 comment
Rumplestiltskin - Voter Comments

Emma Swan is a fictional character from the TV program Once Upon a Time.
1 vote
0 comments
Emma Swan - Voter Comments
No Comments
Vote & Comment
4

The firemen plan to celebrate the imminent retirement of a martinet captain with a party, under the guise of throwing a farewell dinner. A model in a bear suit suffers from heat stroke during a promotion stunt. A bizarre family believes their sleepi... ng mother is dead. The firemen rescue CHP officers from a helicopter   more
0 votes
0 comments
Captain Hook - Voter Comments
No Comments
Vote & Comment
8

Henry Mills is a fictional character from the TV program Once Upon a Time.
0 votes
0 comments
Henry Mills - Voter Comments
No Comments
Vote & Comment
11

Karen is upset that Mac and Paula shared a hotel room, but he assures her nothing happened. Eric takes a job in Saudi Arabia, and asks if Linda can live with Karen. Sally's friend turns out to be Amanda, the twins' nursery school teacher. Danny and ... Val sleep together, and then Danny goes to Amanda's, whom he also has a relationship with. Harold and Olivia fight over their finances. Greg tells Paige he misses her and wants her to come back to work. Paige is furious that Greg sends Ted to Japan instead of having him arrested. Riding down in the elevator, Paige and Ted slap each other. Ted tells Paige she's Greg's weakness because he loves her, and she should take advantage of that   more
0 votes
0 comments
Prince Charming - Voter Comments
No Comments
Vote & Comment
Leave a comment...
(Maximum 900 words)