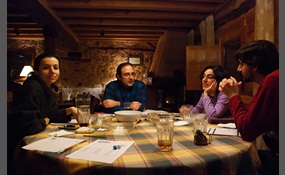 Violence: The roleplaying game of egregious and repulsive bloodshed

Kobolds Ate My Baby! Is an independently published role-playing game from 9th Level Games, a small-press publisher and designer of humorous role-playing games based in Pennsylvania. The name is a derivative reference to the Azaria Chamberlain disapp... earance and the famous misquote, "A dingo ate my baby!" The Super Deluxx Edition was still designed by 9th Level Games, but is published by Dork Storm Press   more
1 vote
0 comments
Kobolds Ate My Baby! - Voter Comments
No Comments
Vote & Comment
3

Dungeons & Dragons is a fantasy tabletop role-playing game originally designed by Gary Gygax and Dave Arneson, and first published in 1974 by Tactical Studies Rules, Inc.. The game has been published by Wizards of the Coast since 1997. It was derive... d from miniature wargames with a variation of the Chainmail game serving as the initial rule system. D&D '​s publication is widely regarded as the beginning of modern role-playing games and the role-playing game industry.D&D departs from traditional wargaming and assigns each player a specific character to play instead of a military formation. These characters embark upon imaginary adventures within a fantasy setting. A Dungeon Master serves as the game's referee and storyteller, while also maintaining the setting in which the adventures occur and playing the role of the inhabitants. The characters form a party that interacts with the setting's inhabitants. Together they solve dilemmas, engage in battles and gather treasure and knowledge. In the process the characters earn experience points to become increasingly powerful over a series of sessions   more
1 vote
0 comments
Dungeons & Dragons - Voter Comments
No Comments
Vote & Comment
9

Paranoia is a dystopian science-fiction tabletop role-playing game originally designed and written by Greg Costikyan, Dan Gelber, and Eric Goldberg, and first published in 1984 by West End Games. Since 2004 the game has been published under licence ... by Mongoose Publishing. The game won the Origins Award for Best Roleplaying Rules of 1984 and was inducted into the Origins Awards Hall of Fame in 2007. Paranoia is notable among tabletop games for being more competitive than co-operative, with players encouraged to betray one another for their own interests, as well as for keeping a lighthearted, tongue in cheek tone despite its dystopian setting.The game is set in a dystopian future city which is controlled by an artificial intelligence construct called 'The Computer', and where information are restricted by 'security clearance'. Players are initially enforcers of The Computer's authority, and will be given missions to seek out and eliminate threats to The Computer's control. The players are also part of prohibited underground movements, and will have secret objectives including theft from and murder of other players   more
0 votes
0 comments
Paranoia - Voter Comments
No Comments
Vote & Comment
10

Tomb of Horrors is an adventure module written by Gary Gygax for the Dungeons & Dragons role-playing game. It was originally written for and used at the 1975 Origins 1 convention. Gygax designed the adventure both to challenge the skill of expert pl... ayers in his own campaign, and to test players who boasted of having mighty player characters able to best any challenge. The module, coded S1, was the first in the S-series, or special series of modules. Several versions of the adventure have been published, the first in 1978, and the most recent, published for the D&D fourth edition, in 2010. It also served as the basis for a novel published in 2002.The module's plot revolves around the tomb of the demi-lich Acererak. The player characters must battle their way past a variety of monsters and traps, with the ultimate goal of destroying Acererak. Tomb of Horrors is considered one of the greatest Dungeons & Dragons modules of all time, as well as one of the most difficult. The module has influenced later Dungeons & Dragons products, and was followed by three other modules in the S-series: S2 White Plume Mountain, S3 Expedition to the Barrier Peaks, and S4 Lost Caverns of Tsojcanth   more
0 votes
0 comments
Tomb of Horrors - Voter Comments
No Comments
Vote & Comment
11

Rogue Trader is a role-playing game in which players take on the roles of a Rogue Trader and his or her retinue.
0 votes
0 comments
Rogue Trader - Voter Comments
No Comments
Vote & Comment
13

Shadowrun is a science fantasy tabletop role-playing game set in a near-future fictional universe in which cybernetics, magic and fantasy creatures co-exist. It combines genres of cyberpunk, urban fantasy and crime, with occasional elements of consp... iracy fiction, horror and detective fiction. From its inception in 1989, Shadowrun has remained among the most popular role-playing games. It has spawned a vast franchise that includes a series of novels, a collectible card game, two miniature-based tabletop wargames, and multiple video games   more
0 votes
0 comments
Shadowrun - Voter Comments
No Comments
Vote & Comment
15