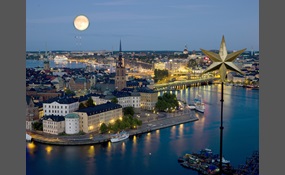 The Sweden Democrats or Swedish Democrats are a far-right, right-wing populist, and anti-immigration political party in Sweden that was founded in 1988. The party describes itself as social conservative with a nationalist foundation. Since 2005 its ... party chairman has been Jimmie Åkesson, while Björn Söder is the party secretary and parliamentary group leader. An anemone hepatica flower has been the official SD logo since 2006.SD is divided in eighteen district party associations throughout Sweden, as well as in various local or municipal associations. Young members are organised in the Sweden Democratic Youth, founded in 1998. The party also distributes a newspaper to its members, called SD-Kuriren.The party first became high profiled in the media after the 2006 general election, as they got great success in many municipality elections. This was particulary notable in Scania and Blekinge, in the far south of the country. In Malmö, Sweden's third largest city, the party got more than 13% of all votes and in Helsingborg around 15%   more
14 votes
1 comment
Sweden Democrats - Voter Comments

The Swedish Social Democratic Party, contesting elections as the Arbetarepartiet–Socialdemokraterna, usually referred to just as the 'Social Democrats'; is the oldest and largest political party in Sweden, founded in 1889. In 1917, a schism occurred...  when the left socialists split from the Social Democrats to form the Swedish Social Democratic Left Party. The symbol of the SAP is traditionally a red rose, which is believed to have been Fredrik Ström's idea. The words of honour, as recorded by the 2001 party programme, are "freedom, equality, and solidarity."The Social Democratic Party's position has a theoretical base within Marxist revisionism. Its party program interchangeably calls their ideology democratic socialism, or social democracy, though few high-level representatives have invoked socialism since Olof Palme. The party supports social welfare provision paid for from progressive taxation. The party supports a social corporatist economy involving the institutionalization of a social partnership system between capital and labour economic interest groups, with government oversight to resolve disputes between the two factions   more
8 votes
0 comments
Swedish Social Democratic Party (Center-left) - Voter Comments
No Comments
Vote & Comment
3

The Left Party is a socialist and feminist political party in Sweden, founded in 1917 following a split from the Swedish Social Democratic Party. The party has had many names throughout its history. In 1917 the party's name was Swedish Social Democr... atic Left Party. It became the Communist Party of Sweden in 1921, the Left Party-Communists in 1967, and adopted its current name in 1990.On welfare issues, the party opposes privatizations. Moreover, the party was against accession to the European Union and still wants Sweden to leave the European Union, and advocates increased public expenditure.From 1998 to 2006, the Left Party was in an arrangement with the ruling Social Democrats and the Greens. Until then it also supported the Social Democratic minority government in the Swedish parliament, as well as in many of Sweden's counties and municipalities.The Left Party is a member of the Nordic Green Left Alliance and its single MEP sits in the European United Left–Nordic Green Left parliamentary group   more
5 votes
2 comments
Left Party - Voter Comments

The Moderate Party is a liberal-conservative political party in Sweden. It is the largest and dominant party of the Swedish centre-right.The party was founded in 1904 as the General Electoral League by a group of conservatives in the Swedish parliam... ent. The party has had two other names during its history: the National Organization of the Right and the Rightist Party.Following minor roles in centre-right governments, the Moderates became the leading opposition party to the Social Democrats and since then those two parties have dominated Swedish politics. In 1991, party leader Carl Bildt formed a minority government after the centre-right coalition had the largest mandate in Parliament. This was the first time the Moderates had been head of government, but following the election loss in 1994, the party spent 12 years as opposition leaders, before it could form a majority government following a successful 2006 general election.Following the 2010 general election, the party gained 30.06% of the vote, and became the major component of the centre-right coalition, the Alliance, along with the Centre Party, the Liberal People's Party and the Christian Democrats   more
4 votes
0 comments
Moderate Party (Center-right) - Voter Comments
No Comments
Vote & Comment
5

Liberals is a liberal party in Finland. Founded in 1965 as a reunification of the People's Party of Finland and Liberal League. Originally named Liberal People's Party, it restyled its name as Liberals in 2000.Liberals was removed from the party reg... istry in 2007 after the failure to gain a seat in two consecutive parliamentary elections   more
1 vote
0 comments
Liberals - Voter Comments
No Comments
Vote & Comment
6

Feminist Initiative is a feminist political party in Sweden. The party was formed in 2005, and announced on 9 September 2005 that it would put up candidates for the 2006 parliamentary elections in Sweden.After running in the consequent two Riksdag e... lections, as well as the European Parliamentary election of 2009, Fi had not taken any seats in either parliament. The European elections of 2014 proved a turning point, as the party attracted 5.3% of the Swedish vote, with Soraya Post taking one seat in the European Parliament. This marks the first time an exclusively feminist political party won a seat in the European Parliament.In the 2014 general election, Fi received a best-ever 3.1% of the vote; despite not meeting the 4.0% threshold for getting seats, Fi became the most popular party outside of parliament   more
0 votes
0 comments
Feminist Initiative - Voter Comments
No Comments
Vote & Comment
8

The Green Party (Swedish: Miljöpartiet de gröna, or the "Green Environmental Party",[9][10] commonly referred to in Swedish as "Miljöpartiet" or MP) is a political party in Sweden based upon green politics.[11] The party was founded in 1981, emergin... g out of a sense of discontent with the existing parties' environmental policies, and sparked by the anti-nuclear power movement following the 1980 nuclear power referendum.[12] The party's breakthrough would come in the 1988 general election when they won seats in the Swedish Riksdag for the first time, capturing 5.5 percent of the vote, and becoming the first new party to enter parliament in seventy years.[13] Three years later, they dropped back below the 4 percent threshold, but returned to parliament again in 1994, and since have retained representation there. The party is represented nationally by two spokespeople, always one man and one woman. These roles are currently held by Gustav Fridolin and Åsa Romson. (wikipedia   more
0 votes
0 comments
Green Party - Voter Comments
No Comments
Vote & Comment
9

The Centre Party was a minor Australian political party formed by Kevin Lyons in 1969, which held the balance of power in the Tasmanian House of Assembly following the 1969 state election in Tasmania. The party formed a minority government with the ... Liberal Party, with Lyons acting as Deputy Premier to Angus Bethune from 1969 to 1972.Kevin Lyons, the son of Tasmanian politician Joseph Lyons, was originally a member of the Liberal Party. In 1966, a dispute arose over preselection and Lyons resigned from the Liberals on 7 September. Lyons remained in the House of Assembly as an independent, until the 1969 election when he ran for the newly formed Centre Party, a repackaged version of the Country Party which had never performed well in Tasmania. Lyons was elected to the House of Assembly as the party's only MHA, after substantial numbers of preferences were transferred to him from Liberal voters in the electorate of Darwin. Labor and the Liberals both won 17 seats in the House, resulting in a hung parliament, with the Centre Party's one seat giving Lyons the balance of power   more
0 votes
0 comments
Centre Party - Voter Comments
No Comments
Vote & Comment
Leave a comment...
(Maximum 900 words)

Heraclitus says2016-04-11T13:32:11.6376448Z
Report Post
The Left Party is a Socialist and Feminist party... That is quite possibly the worst combination of oppressive ideologies I've heard in a long time.

triangle.128k says2016-04-23T21:36:31.8040893Z
Report Post
The Sweden Democrats are way more moderate than the golden dawn. They are just attacked by the media because Sweden has been becoming quite liberal lately.

triangle.128k says2016-04-24T00:12:28.7205907Z
Report Post
With mass migration becoming an issue, immigrants seem to be quite secluded from Swedish society. If Sweden would strengthen its borders and limit middle eastern immigration, a lower number of immigrants would mean they would more easily assimilate.

triangle.128k says2016-04-24T19:03:38.3755381Z
Report Post
@BrendanD19 They don't want to stop all immigrants from coming, rather they want stricter background check and security to weed out immigrants from dangerous areas. They also want to overall just reduce the number.

BrendanD19 says2016-04-24T19:46:44.9969189Z
Report Post
On an unrelated note, since polls are still down, I am making a poll of Greek Political parties and I am going to use something called civinomics. It will be ranked choice.

SocialJusticeWarrior says2016-05-28T21:26:47.7021381Z
Report Post
Why are so many people voting for the far-right, anti-immigration Sweden Democrats? It's scary how the far right is gaining so much power in Europe...

triangle.128k says2016-05-28T21:38:31.5096726Z
Report Post
Too many refugees are in Sweden, so deportation of some of the most trouble-making ones wouldn't hurt. Many "refugees" are also just economic migrants faking as refugees.

BrendanD19 says2016-05-28T21:51:16.8603305Z
Report Post
But given the declining population in Sweden (And other Northern European Nations for that matter) and the fact that most experts agree that Sweden will need more immigrants to keep their economy alive, why should they place strict limits on immigration making it nearly impossible to get in?

triangle.128k says2016-05-28T21:59:51.6948307Z
Report Post
@BrendanD19 Their population is increasing over time, look at some statistics. Immigration in Sweden is becoming pretty extreme; muslim ethnic neighborhoods are on the rise. And in them, they follow arabic customs instead of Swedish ones. Also, your last statement is over-exaggerating. The SDs don't want to make it nearly impossible to get in; they just want to lower rates and only let in immigrants willing to assimilate and/or highly experienced immigrants.

BrendanD19 says2016-05-29T00:27:36.1396537Z
Report Post
If you guys, liked this poll, check out this one for the upcoming Spanish General Election: http://www.Debate.Org/polls/spain-general-election-june-2016
Privacy Policy | Terms of Use
Sitemap | View Desktop Version
©2022 Debate.org. All rights reserved.