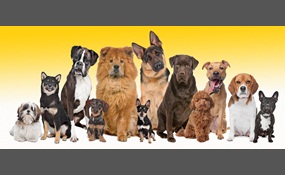 The Beagle is a breed of small to medium-sized dog. A member of the hound group, it is similar in appearance to the foxhound, but smaller with shorter legs and longer, softer ears. Beagles are scent hounds, developed primarily for tracking hare, rab... bit, deer, and other small game. They have a great sense of smell and tracking instinct that sees them employed as detection dogs for prohibited agricultural imports and foodstuffs in quarantine around the world. Beagles are intelligent but single-minded, and popular pets because of their size, even temper, and lack of inherited health problems.Although beagle-type dogs have existed for 2,500 years, the modern breed was developed in Great Britain around the 1830s from several breeds, including the Talbot Hound, the North Country Beagle, the Southern Hound, and possibly the Harrier.Beagles have been depicted in popular culture since Elizabethan times in literature and paintings, and more recently in film, television, and comic books. Snoopy of the comic strip Peanuts has been promoted as "the world's most famous beagle"   more
2 votes
1 comment
Beagle - Voter Comments

The Basset Hound is a short-legged breed of dog of the hound family, as well as one of six recognized Basset breeds in France; furthermore, Bassets are scent hounds that were originally bred for the purpose of hunting rabbits and hare. Their sense o... f smell for tracking is second only to that of the Bloodhound. The name Basset is derived from the French word bas, meaning "low", with the attenuating suffix -et, together meaning "rather low". Basset Hounds are usually Bicolors or Tricolors of standard hound coloration   more
1 vote
0 comments
Basset Hound - Voter Comments
No Comments
Vote & Comment
7

The Boxer is a breed of stocky, medium-sized, short-haired dogs developed in Germany. Their coat is smooth and tight-fitting; colors are fawn or brindled, with or without white markings, which may cover the entire body, and white. Boxers are brachyc... ephalic, have a square muzzle, mandibular prognathism, very strong jaws, and a powerful bite ideal for hanging on to large prey. The Boxer was bred from the Old English Bulldog and the now extinct Bullenbeisser, and is part of the Molosser group. The Boxer is a member of the Working Group.Boxers were first exhibited in a dog show for St. Bernards in Munich in 1895, the first Boxer club being founded the next year. Based on 2013 American Kennel Club statistics, Boxers held steady as the seventh most popular breed of dog in the United States for the fourth consecutive year   more
0 votes
0 comments
Boxer - Voter Comments
No Comments
Vote & Comment
17

The Chow Chow is a dog breed originally from northern China, where it is referred to as Songshi Quan, which means "puffy-lion dog".The breed has also been called the Tang Quan, "Dog of the Tang Empire". It is believed that the Chow Chow is one of th... e native dogs used as the model for the Foo dog, the traditional stone guardians found in front of Buddhist temples and palaces. It is one of the few ancient dog breeds still in existence in the world today   more
0 votes
0 comments
Chow Chow - Voter Comments
No Comments
Vote & Comment
19

A mongrel or mutt is a dog that is not the result of breeding and belongs to no breed. I know it isn't a proper dog breed but if you don't know what breed.
0 votes
0 comments
Mongrel - Voter Comments
No Comments
Vote & Comment
20

The Labrador Retriever, also known as simply Labrador or Lab, is one of several kinds of retrievers, a type of gun dog. Labradors are athletic, playful, and the most popular breed of dog by registered ownership in Australia, Canada, New Zealand, the...  United Kingdom, and the United States.A favourite assistance dog breed in these and other countries, Labradors are frequently trained to aid people who are blind and people with autism, act as therapy dogs, and perform screening and detection work for law enforcement and other official agencies. They are prized as sporting and waterfowl hunting dogs. A few kennels breeding dogs were in England; at the same time a combination of sheep protection policy and rabies quarantine led to their gradual demise in their country of origin.The first and second Earls of Malmesbury, who bred for duck shooting on his estate, and the 5th and 6th Dukes of Buccleuch, and youngest son Lord George William Montagu-Douglas-Scott, were instrumental in developing and establishing the modern Labrador breed in 19th century England   more
0 votes
0 comments
Labrador Retriever - Voter Comments
No Comments
Vote & Comment
21

The Golden Retriever is a large-sized breed of dog bred as gun dogs to retrieve shot waterfowl such as ducks and upland game birds during hunting and shooting parties, and were named 'retriever' because of their ability to retrieve shot game undamag... ed. Golden Retrievers have an instinctive love of water, and are easy to train to basic or advanced obedience standards. They are a long-coated breed, with a dense inner coat that provides them with adequate warmth in the outdoors, and an outer coat that lies flat against their bodies and repels water. Golden Retrievers are well suited to residency in suburban or country environments. Although they need substantial outdoor exercise, they should be housed in a fenced area because of their instinctual tendency to roam. The dog sheds copiously, particularly at the change of seasons, and requires fairly regular grooming.The breed is a prominent participant in conformation shows for purebred dogs. The Golden Retrievers' intelligence makes them a versatile breed and allows them to fill a variety of roles – common ones being guide dog for the blind, hearing dog for the deaf, hunting dog, detection dog, and search and rescue participant   more
0 votes
0 comments
Golden Retriever - Voter Comments
No Comments
Vote & Comment
22

The Akita is a large spitz breed of dog originating from the mountainous northern regions of Japan. There are two separate varieties of Akita: a Japanese strain, known as the "Akita Inu" or "Japanese Akita"; and an American strain, known as the "Aki... ta" or "American Akita". The Japanese strain comes in a small choice of colors, with all other colors considered atypical of the breed, while the American strain comes in all dog colors. The Akita has a short double coat, similar to that of many other northern spitz breeds such as the Siberian Husky, but long coated dogs can be found in many litters due to a recessive gene.The Akita is a powerful, independent and dominant breed, commonly aloof with strangers but affectionate with family members. As a breed, Akitas are generally hardy, but they have been known to suffer from various genetic conditions and be sensitive to certain drugs.In most countries, the American strain of Akita is now considered a separate breed. In the United States and Canada, however, the two strains are considered a single breed with differences in type. For a while, the American strain of Akita was known in some countries as the "Great Japanese Dog"   more
0 votes
0 comments
Akita - Voter Comments
No Comments
Vote & Comment
23

The Airedale Terrier is a breed of the terrier type that originated along the River Aire, in the West Riding of Yorkshire, England. "Dale" is derived from the old Viking word for valley, hence "Airedale", the name by which the area is commonly known... .It is traditionally called the "King of Terriers" because it is the largest of the terrier breeds. Bred from a Welsh Terrier and an Otterhound and probably some other Terrier Breeds, the breed has also been called the Bingley Terrier and Waterside Terrier, It was bred originally to hunt otters in and around the valleys of the River Aire which runs through Airedale. In the United Kingdom this breed has also been used as a War dog, Guide dog and police dog. The working-class people of the Aire Valley needed a family pet that had good size for protection but not such that it would be a big eater. It needed the courage to stand the large guard breeds that were used to deter poachers. The Airedale was also used in their sport of hunting water rats where two dogs were pitted against each other to nose a rat hole when a ferret was released to bolt the rat which escaped to the river   more
0 votes
0 comments
Airedale Terrier - Voter Comments
No Comments
Vote & Comment
24

The Bearded Collie is a medium-sized herding dog with a shaggy coat. This breed has a broad head, short muzzle and a shaggy coat all over the body, even under the chin. The color of the coat changes several times over the life of the dog. The adult ... coats come in any of the four colors, black, brown, blue, or fawn. Height: 20-22 inches (51-56 cm.) Weight: 40-60 pounds (18-27 kg.)dogbreedinfo.Co   more
0 votes
0 comments
Bearded Collie - Voter Comments
No Comments
Vote & Comment
25

The Chihuahua is the smallest breed of dog and is named for the state of Chihuahua in Mexico. Chihuahuas come in a wide variety of sizes, head shapes, colors, and coat lengths.
0 votes
0 comments
Chihuahua - Voter Comments
No Comments
Vote & Comment
28

The Welsh corgi is a small type of herding dog that originated in Wales. Two distinct breeds are recognized: the Pembroke Welsh corgi and the Cardigan Welsh corgi, with the Pembroke being the more common.
0 votes
0 comments
Welsh Corgi - Voter Comments
No Comments
Vote & Comment
29