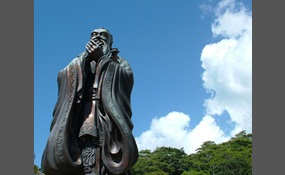 Add your own answers if I left anything out.

Confucianism, literally "The School of the Scholars," is a Chinese ethical and philosophical system originally developed from the teachings of the early Chinese sage Confucius. Confucianism is a complex system of moral, social, political, philosophi... cal, and religious thought which has had tremendous influence on the history of Chinese civilization up to the 21st century. Some people in the West have considered it to have been the "state religion" of Imperial China because of the Chinese government's promotion of Confucianist values   more
7 votes
0 comments
Confucianism - Voter Comments
No Comments
Vote & Comment
2

Taoism is a philosophical, ethical, and religious tradition of Chinese origin that emphasizes living in harmony with the Tao. The term Tao means "way", "path" or "principle", and can also be found in Chinese philosophies and religions other than Tao... ism. In Taoism, however, Tao denotes something that is both the source and the force behind everything that exists.While Taoism drew its cosmological notions from the tenets of the School of Yin Yang, the Tao Te Ching, a compact and ambiguous book containing teachings attributed to Laozi, is widely considered its keystone work. Together with the writings of Zhuangzi, these two texts build the philosophical foundation of Taoism deriving from the 8 Hexagrams of Fu Xi in the 2700s BCE in China.Taoist propriety and ethics may vary depending on the particular school, but in general tends to emphasize wu-wei, "naturalness", simplicity, spontaneity, and the Three Treasures: compassion, moderation, and humility   more
1 vote
0 comments
Daoism - Voter Comments
No Comments
Vote & Comment
3

Mao Zedong Thought is a political theory which is derived from the teachings of the Chinese political leader Mao Zedong. Its followers, known as Maoists for short, consider it as an anti-Revisionist form of Marxism-Leninism. Developed during the 195... 0s, 1960s, and up until the Deng Xiaoping reforms, it was widely applied as the political and military guiding ideology of the Communist Party of China, and as theory guiding revolutionary movements around the world   more
0 votes
0 comments
Maoism - Voter Comments
No Comments
Vote & Comment
4

The Logicians or School of Names was a school of Chinese philosophy that grew out of Mohism during the Warring States period in 479–221 BCE. It is also sometimes called the School of Forms and Names.One of the few surviving lines from the school, "a...  one-foot stick, every day take away half of it, in a myriad ages it will not be exhausted," is obviously an independent formulation of Zeno's paradoxes. However, the majority of their paradoxes that survive are of unclear meaning, for example, "A hound can be deemed a sheep."Their philosophy is often considered to be akin to those of the sophists or of the dialecticians. Joseph Needham notes that their works have been lost, except for the partially preserved Gongsun Longzi, and except for the paradoxes of Chapter 33 of the Zhuangzi. Needham also notes that the disappearance of the greater part of Gongsun Longzi must be considered one of the worst losses in the ancient Chinese books, as what remains is said to reach the highest point of ancient Chinese philosophical writing   more
0 votes
0 comments
School of Names - Voter Comments
No Comments
Vote & Comment
5

The School of Naturalists or the School of Yin-yang was a Warring States era philosophy that synthesized the concepts of yin-yang and the Five Elements; Zou Yan is considered the founder of this school. His theory attempted to explain the universe i... n terms of basic forces in nature: the complementary agents of yin and yang and the Five Elements or Five Phases. In its early days, this theory was most strongly associated with the states of Yan and Qi. In later periods, these epistemological theories came to hold significance in both philosophy and popular belief. This school was absorbed into the alchemic and magical dimensions of Taoism as well as into the Chinese medical framework. The earliest surviving recordings of this are in the Ma Wang Dui texts and Huang Di Nei Jing   more
0 votes
0 comments
School of Naturalists - Voter Comments
No Comments
Vote & Comment
6

Mohism or Moism was a Chinese philosophy developed by the followers of Mozi, 470 BC–c.391 BC. It evolved at about the same time as Confucianism, Taoism and Legalism, and was one of the four main philosophic schools during the Spring and Autumn Perio... d and the Warring States period. During that time, Mohism was seen as a major rival to Confucianism. The Qin dynasty, which united China in 221 BC, adopted Legalism as the official government philosophy. The Han dynasty that followed adopted Confucianism as the official state philosophy, as did most other successive dynasties. Taoism, and later Buddhism, also played an important part in later Chinese life and thought, while Mohism all but disappeared as a separate school of thought. Mohist books were later merged into Taoist canon. From the Stanford Encyclopedia of Philosophy: "A number of factors can be cited to explain Mohism's decline and disappearance. Graham is probably right, for instance, to suggest that after the Qin unification, the Mohists lost the political influence they had exerted as expert craftsmen and defense specialists who helped smaller states survive during the Warring States era   more
0 votes
0 comments
Mohism - Voter Comments
No Comments
Vote & Comment
7

Legalism is a term used to categorize an intellectual current in the political philosophy of the Warring States period, and sometimes similar but less distinguishable activity in the preceding Spring and Autumn period. It is most known in relation w... ith the more authoritarian Qin state, its ministers, and with the Emperor Qin Shi Huangdi who united China in 221 BC, ending the Warring States period; although its development is by no means a narrow phenomena, and the more Confucian rulers of other states could be termed as having been "Legalistic" on the basis of methodology, the philosophy is most often associated with the distinct anti-Confucianism and increased legal emphasis of the later period. The "Legalist" tendency came to emphasize the development and precise, inflexible application of the institution of law under the aegis of the figure of the autocrat, and conflicted increasingly with traditional and Confucian systems, with the result that it was later given its own class   more
0 votes
0 comments
Legalism - Voter Comments
No Comments
Vote & Comment
No comments yet.
Leave a comment...
(Maximum 900 words)
Privacy Policy | Terms of Use
Sitemap | View Desktop Version
©2021 Debate.org. All rights reserved.