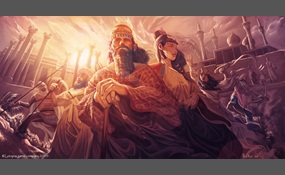 I don't know why the Persians get demonized in 300. If anything, the Greeks should be the ones getting demonized.

The Achaemenid Empire, or First Persian Empire, was an empire based in Western Asia in Iran, founded in the 6th century BC by Cyrus the Great. The dynasty draws its name from King Achaemenes, who ruled Persis between 705 BC and 675 BC. The empire ex... panded to eventually rule over significant portions of the ancient world, which at around 500 BC stretched from parts of the Balkans and Thrace-Macedonia in the west, to the Indus valley in the east. The Achaemenid Empire would eventually control Egypt as well. It was ruled by a series of monarchs who unified its disparate tribes and nationalities by constructing a complex network of roads.By the 600s BC, the Persians had settled in the region in the southwestern portion of the Iranian plateau, in what came to be known as Persis bounded on the west by the Tigris River and on the south by the Persian Gulf; this region came to be their heartland. It was from this region that Cyrus the Great would advance to defeat the Kingdom of Media, the Kingdom of Lydia, and the Babylonian Empire, to form the Achaemenid Empire   more
3 votes
1 comment
Achaemenid Empire - Voter Comments

The Abbasid Caliphate, was the third of the Islamic caliphates to succeed the Islamic prophet Muhammad. The Abbasid dynasty descended from Muhammad's youngest uncle, Abbas ibn Abd al-Muttalib. They ruled as caliphs, for most of their period from the... ir capital in Baghdad in modern-day Iraq, after taking back authority of the Muslim empire from the Umayyads in 750 CE.The Abbasid caliphate first centered their government in Kufa, but in 762 the caliph Al-Mansur founded the city of Baghdad, north of the Persian capital city of Ctesiphon. The choice of a capital so close to Persia proper reflects a growing reliance on Persian bureaucrats, most notably of the Barmakid family, to govern the territories conquered by Arab Muslims, as well as an increasing inclusion of non-Arab Muslims in the ummah. Despite this cooperation, the Abbasids of the 8th century were forced to cede authority over Al-Andalus and Maghreb to the Umayyads, Morocco to the Idrisid dynasty, Ifriqiya to the Aghlabids, and Egypt to the Shi'ite Caliphate of the Fatimids. The political power of the caliphs largely ended with the rise of the Buyids and the Seljuq Turks   more
1 vote
0 comments
Abbasid Caliphate - Voter Comments
No Comments
Vote & Comment
3

The Safavid dynasty was one of the most significant ruling dynasties of Persia, and "is often considered the beginning of modern Persian history". They ruled one of the greatest Persian empires after the Muslim conquest of Persia and established the...  Twelver school of Shi'a Islam as the official religion of their empire, marking one of the most important turning points in Muslim history. The Safavids ruled from 1501 to 1722 and, at their height, they controlled all of modern Iran, Azerbaijan, Bahrain and Armenia, most of Georgia, the North Caucasus, Iraq, Kuwait and Afghanistan, as well as parts of Turkey, Syria, Pakistan, Turkmenistan and Uzbekistan. Safavid Iran was one of the Islamic "gunpowder empires", along with its neighbours, its arch rival the Ottoman Empire, and Mughal Empire.The Safavid dynasty had its origin in the Safaviyya Sufi order, which was established in the city of Ardabil in the Azerbaijan region. It was of mixed ancestry. From their base in Ardabil, the Safavids established control over all of Greater Iran and reasserted the Iranian identity of the region, thus becoming the first native dynasty since the Sassanid Empire to establish a unified Iranian state   more
0 votes
0 comments
Safavid dynasty - Voter Comments
No Comments
Vote & Comment
4

The Parthian Empire, also known as the Arsacid Empire, was a major Iranian political and cultural power in ancient Iran, also known as ancient Persia. Its latter name comes from Arsaces I of Parthia who, as leader of the Parni tribe, founded it in t... he mid-3rd century BC when he conquered the region of Parthia in Iran's northeast, then a satrapy in rebellion against the Seleucid Empire. Mithridates I of Parthia greatly expanded the empire by seizing Media and Mesopotamia from the Seleucids. At its height, the Parthian Empire stretched from the northern reaches of the Euphrates, in what is now central-eastern Turkey, to eastern Iran. The empire, located on the Silk Road trade route between the Roman Empire in the Mediterranean Basin and the Han Empire of China, became a center of trade and commerce.The Parthians largely adopted the art, architecture, religious beliefs, and royal insignia of their culturally heterogeneous empire, which encompassed Persian, Hellenistic, and regional cultures. For about the first half of its existence, the Arsacid court adopted elements of Greek culture, though it eventually saw a gradual revival of Iranian traditions   more
0 votes
0 comments
Parthian Empire - Voter Comments
No Comments
Vote & Comment
5

The Sasanian Empire, known to its inhabitants as Ērānshahr and Ērān in Middle Persian, was the last Iranian empire before the rise of Islam, ruled by the Sasanian dynasty from 224 CE to 651 CE. The Sasanian Empire, which succeeded the Parthian Empir... e, was recognized as one of the main powers in Western and Central Asia, alongside the Roman–Byzantine Empire, for a period of more than 400 years.The Sasanian Empire was founded by Ardashir I, after the fall of the Parthian Empire and the defeat of the last Arsacid king, Artabanus V. At its greatest extent, the Sassanid Empire encompassed all of today's Iran, Iraq, Eastern Arabia, the Levant, the Caucasus, Egypt, large parts of Turkey, much of Central Asia, Yemen and Pakistan. According to a legend, the vexilloid of the Sassanid Empire was the Derafsh Kaviani. It was also hypothesized that the transition toward the Sassanid Empire represents the end of struggle of ethnic proto-Persians with their close migrant ethnic relatives, the Parthians, whose original homeland was in modern-day Central Asia   more
0 votes
0 comments
Sasanian Empire - Voter Comments
No Comments
Vote & Comment
No comments yet.
Leave a comment...
(Maximum 900 words)
Privacy Policy | Terms of Use
Sitemap | View Desktop Version
©2020 Debate.org. All rights reserved.