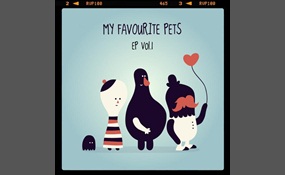 Pets are the Best!

I can 'accidentaly' get out of my terrarium and slither into the bed of your sister, mother, girlfriend or wife and scare them half to death (hehehe).
1 vote
1 comment
Snake - Voter Comments

Sharks are a group of fish characterized by a cartilaginous skeleton, five to seven gill slits on the sides of the head, and pectoral fins that are not fused to the head. Modern sharks are classified within the clade Selachimorpha and are the sister...  group to the rays. However, the term "shark" has also been used for extinct members of the subclass Elasmobranchii outside the Selachimorpha, such as Cladoselache and Xenacanthus. Under this broader definition, the earliest known sharks date from more than 420 million years ago.Since then, sharks have diversified into over 470 species. They range in size from the small dwarf lanternshark, a deep sea species of only 17 centimetres in length, to the whale shark, the largest fish in the world, which reaches approximately 12 metres. Sharks are found in all seas and are common to depths of 2,000 metres. They generally do not live in freshwater although there are a few known exceptions, such as the bull shark and the river shark, which can survive in both seawater and freshwater. They breathe through five to seven gill slits   more
0 votes
0 comments
Shark - Voter Comments
No Comments
Vote & Comment
7

Bats are mammals of the order Chiroptera whose forelimbs form webbed wings, making them the only mammals naturally capable of true and sustained flight. By contrast, other mammals said to fly, such as flying squirrels, gliding possums, and colugos, ... can only glide for short distances. Bats do not flap their entire forelimbs, as birds do, but instead flap their spread-out digits, which are very long and covered with a thin membrane or patagium.Bats are the second largest order of mammals, representing about 20% of all classified mammal species worldwide, with about 1,240 bat species divided into two suborders: the less specialized and largely fruit-eating megabats, or flying foxes, and the highly specialized and echolocating microbats. About 70% of bat species are insectivores. Most of the rest are frugivores, or fruit eaters. A few species, such as the fish-eating bat, feed from animals other than insects, with the vampire bats being hematophagous, or feeding on blood.Bats are present throughout most of the world, performing vital ecological roles of pollinating flowers and dispersing fruit seeds   more
0 votes
0 comments
Bat - Voter Comments
No Comments
Vote & Comment
8