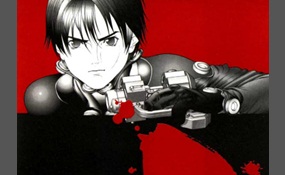 Seinen: Manga aimed at males age 18+ (Though often read by females and males of younger ages)

Gantz is a Japanese manga series written and illustrated by Hiroya Oku. Gantz tells the story of Kei Kurono and his friend Masaru Kato who die in a train accident and become part of a semi-posthumous "game" in which they and several other recently d... eceased people are forced to hunt down and kill aliens armed with a handful of futuristic items, equipment, and weaponry. Both the manga and anime are noted for their heavy violence and sexual content.The Gantz anime adaptation, directed by Ichiro Itano and animated by Gonzo, contains 26 episodes divided into two seasons. A series of two live action movies based on the manga were produced and released in January–April 2011   more
0 votes
0 comments
Gantz - Voter Comments
No Comments
Vote & Comment
7

Vagabond is a Japanese manga series written and illustrated by Takehiko Inoue. It portrays a fictionalized account of the life of Japanese swordsman Miyamoto Musashi, based on Eiji Yoshikawa's novel Musashi.It has been serialized in Weekly Morning m... agazine since 1998, with the chapters collected into 37 tankōbon volumes by Kodansha as of July 2014. Viz Media licensed the series for English release in North America and has published 36 volumes as of October 2014. Vagabond won a 2000 Kodansha Manga Award and the 2002 Tezuka Osamu Cultural Prize, and has sold more than 82 million copies worldwide   more
0 votes
0 comments
Vagabond - Voter Comments
No Comments
Vote & Comment
8

Vinland Saga is a Japanese historical manga series written and drawn by award-winning manga author Makoto Yukimura. The series is published by Kodansha, and was first serialized in the youth-targeted Weekly Shōnen Magazine before moving to the month... ly manga magazine Afternoon, aimed at younger adult men. As of March 2013, the series has been compiled into twelve bound volumes. The series is also licensed in English by Kodansha Comics USA.The title, Vinland Saga, would evoke associations to Vinland as described in two Norse sagas. Vinland Saga is, however, set in Dane-controlled England at the start of the 11th century, and features the Danish invaders of England commonly known as Vikings. The story combines a dramatization of King Cnut the Great's historical rise to power with a revenge plot centered on the historical explorer Thorfinn, the son of a murdered ex-warrior. The presentation and style of the series has been compared by reviewers to the more realistically grounded segments of Kentarō Miura's classic dark fantasy manga Berserk   more
0 votes
0 comments
Vinland Saga - Voter Comments
No Comments
Vote & Comment
No comments yet.
Leave a comment...
(Maximum 900 words)
Privacy Policy | Terms of Use
Sitemap | View Desktop Version
©2020 Debate.org. All rights reserved.