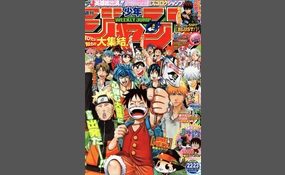 One Piece is a Japanese shõnen manga series written and illustrated by Eiichiro Oda.
4 votes
1 comment
One Piece - Voter Comments

The fictional universe that contains the anime, manga and television films that deal with the world of Death Note.
4 votes
0 comments
Death Note - Voter Comments
No Comments
Vote & Comment
3

Naruto is a Japanese manga series written and illustrated by Masashi Kishimoto. It tells the story of Naruto Uzumaki, an adolescent ninja who constantly searches for recognition and dreams to become the Hokage, the ninja in his village who is acknow... ledged as the leader and the strongest of all. The series is based on a one-shot manga by Kishimoto that was published in the August 1997 issue of Akamaru Jump.Naruto was serialized in Weekly Shōnen Jump magazine from the 43rd issue of 1999 to the 50th issue of 2014, with the chapters collected into seventy-two tankōbon volumes by Shueisha. The manga was later adapted into a television anime, which was produced by Studio Pierrot and Aniplex. It premiered across Japan on the terrestrial TV Tokyo and other TX Network stations on October 3, 2002. The first series lasted 220 episodes, while Naruto: Shippuden, a sequel to the original series, has been airing since February 15, 2007. In addition to the anime series, Studio Pierrot has developed ten movies and several original video animations. Other types of merchandise include light novels, video games, and trading cards developed by several companies   more
1 vote
0 comments
Naruto - Voter Comments
No Comments
Vote & Comment
4

Bakuman. Is a Japanese manga series written by Tsugumi Ohba and illustrated by Takeshi Obata, the same creative team responsible for Death Note. It was serialized in the magazine Weekly Shōnen Jump from August 11, 2008 to April 23, 2012, with the 17... 6 chapters collected into 20 tankōbon volumes by Shueisha. The story follows talented artist Moritaka Mashiro and aspiring writer Akito Takagi, two ninth grade boys who wish to become manga artists, with Mashiro as the artist and Takagi as the writer. Some characters resemble real authors and editors of Weekly Shōnen Jump, and many manga titles mentioned in Bakuman have actually been published in the magazine.An anime television adaptation of the series created by J.C.Staff began airing on NHK-E on October 2, 2010. The third and final season of which ended broadcast on March 30, 2013. A live-action film adaptation is set for a 2015 release. Bakuman was the seventh best-selling manga series of 2011 and the tenth best of 2012, with nearly 4.4 million and over 3.2 million copies sold those years respectively. As of May 2014, it has over 15 million volumes in circulation   more
1 vote
0 comments
Bakuman - Voter Comments
No Comments
Vote & Comment
5

Neon Genesis Evangelion, commonly referred to as NGE, Evangelion or Eva, is a Japanese animated television series produced by Tatsunoko Productions and Gainax and directed by Hideaki Anno. It was broadcast on TV Tokyo from October 1995 to March 1996... . The original Japanese cast of the show includes the voice actors and singers Megumi Ogata as Shinji Ikari, Megumi Hayashibara as Rei Ayanami, and Yūko Miyamura as Asuka Langley Soryu. The music was composed by Shirō Sagisu and would top the Oricon charts upon release; the theme song continues to receive recognition for its lasting impact in the decades after its release. The Evangelion franchise also includes a movie tetralogy, Rebuild of Evangelion, and several spin-off anime, manga and video game series.Evangelion is an apocalyptic anime in the mecha genre. The series is set in a futuristic Tokyo, fifteen years after a worldwide cataclysm. The main story centers on Shinji, a teenage boy who is recruited by the shadowy organization NERV to pilot a giant bio-machine called an Evangelion in combat against monstrous beings known as Angels   more
1 vote
1 comment
Neon Genesis Evangelion - Voter Comments

Bleach refers to a number of chemicals which remove colour, whiten or disinfect, often by oxidation.The bleaching process has been known for millennia, but the chemicals currently used for bleaching resulted from the work of several 18th century sci... entists. Chlorine is the basis for the most commonly used bleaches, for example, the solution of sodium hypochlorite, which is so ubiquitous that most simply call it "bleach", and calcium hypochlorite, the major compound in "bleaching powder". Oxidizing bleaching agents that do not contain chlorine most often are based on peroxides, such as hydrogen peroxide, sodium percarbonate and sodium perborate. While most bleaches are oxidizing agents, some are reducing agents such as sodium dithionite and sodium borohydride.Bleaches are used as household chemicals to whiten clothes and remove stains and as disinfectants, primarily in the bathroom and kitchen. Many bleaches have strong bactericidal properties, and are used for disinfecting and sterilizing and thus are used in swimming pool sanitation to control bacteria, viruses and algae and in any institution where sterile conditions are needed   more
0 votes
0 comments
Bleach - Voter Comments
No Comments
Vote & Comment
8

Attack on Titan is a Japanese manga series written and illustrated by Hajime Isayama. The series began serialization in Kodansha's Bessatsu Shōnen Magazine on September 9, 2009, and has been collected into 15 tankōbon volumes as of December 9, 2014....  It is set in a world where humanity lives inside cities surrounded by enormous walls as a defense against the Titans, gigantic humanoid creatures who devour humans seemingly without reason. The story initially centers on Eren Yeager, his adopted sister Mikasa Ackerman, and their childhood friend Armin Arlert, who join the military to fight the Titans after their home town is invaded and Eren's mother is eaten. As the story progresses, the truth behind the origin of the Titans arises and the story shifts to one about political subterfuge.A spin-off light novel series began in December 2011, and has received a manga adaptation. An additional light novel series and three additional spin-off manga series are also being serialized. A television anime adaptation produced by Wit Studio and Production I.G aired in Japan on MBS between April and September 2013 and a second season is confirmed to be released in 2016   more
0 votes
0 comments
Attack on Titan - Voter Comments
No Comments
Vote & Comment
9

Dragon Ball is an Japanese anime television series produced by Toei Animation. It is an adaptation of the first 194 chapters of the manga of the same name created by Akira Toriyama, which were published in Weekly Shōnen Jump from 1984 to 1988. The a... nime is composed of 153 episodes that were broadcast on Fuji TV from February 26, 1986 to April 12, 1989.Dragon Ball follows the adventures of the protagonist Goku, a super strong naive boy, who upon meeting Bulma sets out to gather the seven wish-granting Dragon Balls. After becoming a student of martial arts master Kame-Sennin, he and his fellow pupil Kuririn enter a tournament that attracts the most powerful fighters in the world. He then sets out on his own and winds up facing and destroying the Red Ribbon Army single-handedly. When Kuririn is later killed after another tournament, Goku exacts revenge on his killer Piccolo Daimao. Three years later, Goku, now a young adult, must fight Piccolo Daimao's offspring Piccolo. The remaining 325 chapters of the manga were adapted into the Dragon Ball Z anime   more
0 votes
0 comments
Dragon Ball/ Dragonball Z - Voter Comments
No Comments
Vote & Comment
No comments yet.
Leave a comment...
(Maximum 900 words)
Privacy Policy | Terms of Use
Sitemap | View Desktop Version
©2020 Debate.org. All rights reserved.