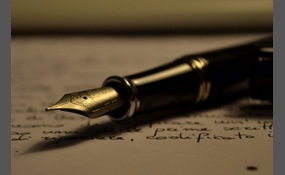 Wattpad is a writing community in which users are able to post articles, stories, fan fiction, and poems about anything either online or through the Wattpad app. The content includes work by undiscovered and published writers. Users are able to comm... ent and like stories or join groups associated with the website. Around half of the users are U.S. based; other users come from the U.K., Canada, the Philippines, Australia, United Arab Emirates and other countries   more
6 votes
0 comments
Wattpad.Com - Voter Comments
No Comments
Vote & Comment
2

FanFiction.Net is an automated fan fiction archive site. It was founded in 1998 by Los Angeles computer programmer Xing Li, who also runs the site. As of 2010, FanFiction.Net is the largest and most popular fan fiction website in the world. It has n... early 2.2 million registered users and hosts stories in over 30 languages.The site is split into nine main categories: Anime/Manga, Books, Cartoons, Miscellaneous, Games, Comics, Movies, Plays/Musicals, and TV Shows. The site also includes the Crossover category, added on March 27, 2009. Users who complete the free registration process can submit their fan fiction, maintain a user profile, review other stories, apply for a beta reader position, contact each other via private messages, and maintain a list of favorite stories and authors. There are centralized communities and forums. In lieu of signing up with a new account, FanFiction.Net allows users to use their Google, Facebook, or Twitter accounts   more
2 votes
0 comments
FanFiction.Net - Voter Comments
No Comments
Vote & Comment
3

National Novel Writing Month, shortened as NaNoWriMo, is an annual internet-based creative writing project that takes place during the month of November. NaNoWriMo challenges participants to write 50,000 words from November 1 until the deadline at 1... 1:59PM on November 30. The goal of NaNoWriMo is to get people writing and keep them motivated throughout the process. To ensure this, the website provides participants with tips for writer's block, local places writers participating in NaNoWriMo are meeting, and an online community of support. The idea is to focus on completion instead of perfection. NaNoWriMo focuses on the length of a work rather than the quality, encouraging writers to finish their first draft so that it can later be edited at the author's discretion. NaNoWriMo's main goal is to encourage creativity worldwide. The project started in July 1999 with just 21 participants, but by the 2010 event over 200,000 people took part – writing a total of over 2.8 billion words.Writers wishing to participate first register on the project's website, where they can post profiles and information about their novels, including synopsis and excerpts   more
0 votes
0 comments
NaNowrimo.Org - Voter Comments
No Comments
Vote & Comment
5

The website is so obscure that I can't even find it's logo so here is a pen instead.
0 votes
0 comments
Valorpen.Com - Voter Comments
No Comments
Vote & Comment
7

Haven't been to this site before but it has a similar logo to scribophile.
0 votes
0 comments
CritiqueCircle.Com - Voter Comments
No Comments
Vote & Comment
Leave a comment...
(Maximum 900 words)