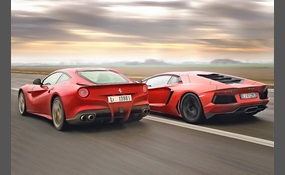 The Enzo Ferrari is a 12 cylinder mid-engine berlinetta supercar named after the company's founder, Enzo Ferrari. It was built in 2002 using Formula One technology, such as a carbon-fibre body, F1-style electrohydraulic shift transmission, and carbo... n fibre-reinforced silicon carbide ceramic composite disc brakes. Also used are technologies not allowed in F1 such as active aerodynamics and traction control. After a downforce of 7600 N is reached at 300 km/h the rear wing is actuated by computer to maintain that downforce. The Enzo's F140 B V12 engine was the first of a new generation for Ferrari. It is based on the design of the V8 found in Maserati's Quattroporte, using the same basic design and 104 mm bore spacing. This design will replace the former architectures seen in V12 and V8 engines used in most other contemporary Ferraris. The 2005 F430 is the second Ferrari to get a version of this new powerplant   more
17 votes
0 comments
Enzo Ferrari - Voter Comments
No Comments
Vote & Comment
2

The Lamborghini Murcielago is a sports car produced by Italian automaker Lamborghini between 2001 and 2010. Successor to the Diablo and flagship of the automaker's lineup, the Murciélago was introduced as a coupé in 2001. The Murcielago was first av... ailable in North America for the 2002 model year. The automaker's first new design in eleven years, the car was also the brand's first new model under the ownership of German parent company Audi, which is owned by Volkswagen. It is styled by Peruvian-born Belgian Luc Donckerwolke, Lamborghini's head of design from 1998 to 2005.A roadster version was introduced in 2004, followed by the updated LP 640 coupé and roadster and limited edition LP 650–4 Roadster. The final variation to wear the Murciélago nameplate was the LP 670–4 SuperVeloce, powered by the largest and final evolution of the Lamborghini V12 engine. Production of the Murciélago ended on November 5, 2010, with a total run of 4,099 cars. Its successor, the Aventador, was released at the 2011 Geneva Motor Show   more
16 votes
4 comments
Lamborghini Murciélago - Voter Comments