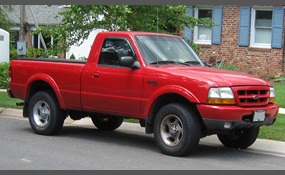 The Ford Ranger was a compact pickup truck manufactured and marketed by Ford Motor Company for the North American, Chilean, Argentinian, and Brazilian markets for model years 1983 through 2012. The "Ranger" nameplate had been previously applied to a...  premium styling package on the Ford F-Series full-size pickup trucks, beginning in 1965. In 1983, the Ranger was introduced as the replacement for the Ford Courier, a re-badged version of the Mazda B-Series, in a segment largely defined by the pickup trucks from Datsun and Toyota. From 1987 to 2004, the Ranger was the best-selling compact pickup in America.Re-badged variants of the second-generation Ford Ranger were marketed by Mazda as the B-Series with Mazda using engine displacement for their model designation: the B2500 had the 2.5 L I4 engine and the B4000 has a 4.0 L V6. For 2002, the B-Series was renamed to simply Mazda Truck in the United States.The Ranger and Mazda B-Series were manufactured at Ford's Twin Cities Assembly Plant in St. Paul, Minnesota until 2011, at Louisville Assembly Plant in Louisville, Kentucky until 1999, and at the Edison Assembly plant in Edison, New Jersey until 2004.Declining sales of the compact truck segment as a whole and the closure of the Twin Cities Assembly Plant led to the cancellation of the Ranger after the 2011 model year; a small, final run of 2012 models were produced exclusively for the fleet market   more
11 votes
1 comment
Ford Ranger - Voter Comments

The Chevrolet S-10 is a compact pickup truck from the Chevrolet marque of General Motors. It was the first compact pickup of the big three American automakers. When it was first introduced in 1982, the GMC version was known as the S-15 and later ren... amed the GMC Sonoma. A high-performance version was released in 1991 and given the name of GMC Syclone. The pickup was also sold by Isuzu as the Hombre from 1996 through 2000, but was only sold in North America. There was also an SUV version, the Chevrolet S-10 Blazer/GMC S-15 Jimmy. An electric version was leased as a fleet vehicle in 1997 and 1998. Together, these pickups are often referred to as the S-series.In North America, the S-series was replaced by the Chevrolet Colorado, GMC Canyon, and Isuzu i-Series in 2004.The S-Series ended production in Brazil in 2012, being replaced by the Chevrolet Colorado, but still with the name S-10   more
9 votes
1 comment
Chevrolet S-10 - Voter Comments

The Dodge Dakota was a mid-size pickup truck from Chrysler's Ram division. From its introduction through 2009, it was marketed by Dodge. The first Dakota was introduced in 1986 as a 1987 model alongside the redesigned Dodge Ram 50. The Dakota was no... minated for the North American Truck of the Year award for 2000. The Dakota has always been sized above the compact Ford Ranger and Chevrolet S-10 but below the full-sized pickups such as Dodge's own Ram. It is a conventional design with body-on-frame construction and a leaf spring/live axle rear end. The Dakota was the first mid-size pickup with an optional V8 engine. One notable feature was the Dakota's rack and pinion steering, a first for work trucks. Dakotas have been used by police and fire departments, as off-road vehicles, patrol trucks, or even brush trucks   more
7 votes
1 comment
Dodge Dakota - Voter Comments