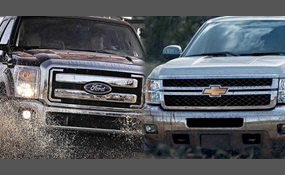 Which is your favourite brand? Opine this topic by filling out the answer form below. Provide commentary to further express your opinion if necessary.

Tboning says2015-04-11T21:36:30.6876599-05:00
Report Post
Chevy is a great innovator. They build their cars with quality in mind and lead the way in Trucks, SUVs, and sedans. Their Impala is one of the greatest sedans ever created, with plenty of technology, space, safety, and build quality enough for it to be called a luxury vehicle. They are a great innovator in the way of technology (first company to include 4G wifi in their cars) and are arguably the company that put the US back on top. Both the Chevy Silverado and Ford F-150 are great trucks. The Ford F-150 has done slightly better in sales but they are both absolutely amazing and are tied in performance. The Chevy has a more reliability with its Silverado, meaning it withstands the test of time better, but maybe thats just due to there being more Silverado pickups from the 1900s on the road now than Ford trucks. Either way, both car companies are great, and it comes down to opinion. In the end, my opinion just leans slightly more towards Chevy. It beats Ford in almost every class (Impala v. Taurus, Mustang v. Camaro, Suburban v. Expedition depending on how you use it) in my opinion. Experience: I have owned a Chevy Impala, Ford F-150, and Camaro and loved all of them. I loved both and this was the hardest decision I've made. I've extensively driven many of the vehicles in both categories and now drive a Hyundai Sonata so consider me unbiased. :P

The Ford Motor Company (commonly referred to as simply Ford) is an American multinational automaker headquartered in Dearborn, Michigan, a suburb of Detroit. It was founded by Henry Ford and incorporated on June 16, 1903. The company sells automobil... es and commercial vehicles under the Ford brand and most luxury cars under the Lincoln brand. Ford also owns Brazilian SUV manufacturer, Troller, and Australian performance car manufacturer FPV. In the past it has also produced tractors and automotive components. Ford owns a 2.1% stake in Mazda of Japan, an 8% stake in Aston Martin of the United Kingdom, and a 49% stake in Jiangling of China. It also has a number of joint-ventures, two in China (Changan Ford Mazda and Ford Lio Ho), one in Thailand (AutoAlliance Thailand), one in Turkey (Ford Otosan), and one in Russia (Ford Sollers). It is listed on the New York Stock Exchange and is controlled by the Ford family, although they have minority ownership. It is described by Forbes as "the most important industrial company in the history of the United States.   more
8 votes
1 comment
The Ford Motor Company - Voter Comments