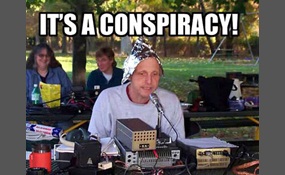 Fixed, you can now add answers.

The holocaust is obviously a jewish/communist conspiracy theory. Hitler didn't genocide against millions, those commies and jews lie about everything!
5 votes
0 comments
Holohoax - Voter Comments
No Comments
Vote & Comment
3

The theory of Evolution

The belief that we came from monkeys, lol.
5 votes
2 comments
The theory of Evolution - Voter Comments

Mathgeekjoe says2015-04-21T20:00:31.2920112-05:00
Report Post
I think the correct term in macroevolution is ape-like ancestor which isn't a monkey or an ape. So people who say we evolved from monkeys don't even understand what macroevolution claims. I personally don't believe in macroevolution due to mathematical and scientific problems I have with it.
Vote & Comment
4

Many planes and boats keep disappearing in the bermuda triangle. IT HAS TIME TRAVEL PROPERTIES WHICH THE ILLUMINATI CREATED!
3 votes
0 comments
The bermuda triangle has time travel properties - Voter Comments
No Comments
Vote & Comment
6

The Illuminati is behind a secret new/one world order! We must all fight them!
2 votes
0 comments
New world order - Voter Comments
No Comments
Vote & Comment
7

The belief that the ancient hebrew mythology is more reliable than science. Imagine if everyone went around praising the Greek gods and condemning people who didn't agree. Probably would happen if the 'messiah' was born in ancient Greece instead of ... Israel. Lo   more
2 votes
0 comments
Creationism - Voter Comments
No Comments
Vote & Comment
8

We are living in the matrix

Alien Vistings in the Past

Mathgeekjoe says2015-04-21T21:02:45.7066057-05:00
Report Post
Well the theory that we came from apes or monkeys is incorrect. The correct term for the common ancestor is ape-like creature. It is surprising how many people have these misconception about evolution.

Heraclitus says2015-04-22T14:23:49.3894667-05:00
Report Post
There is a ,arge amount of evidence supporting the ancient alien theory. I actually find most of these things very interesting. And by the way evolution is scientific fact. I am actually surprised some people still believe that the Ancient Hebrew mythology is more reliable than scientific proof.