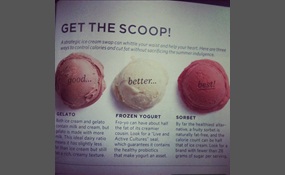 Gelato is the Italian word for ice cream, derived from the Latin word "gelātus". In American English this word commonly refers to varieties of ice cream made in a traditional Italian style. Gelato is made with milk, cream, various sugars, and flavor... ing such as fresh fruit and nut purees. Gelato is a type of soft ice cream containing a relatively small amount of air. By statute, gelato in Italy must have at least 3.5% butterfat, with no upper limit established. The sugar content in homemade gelato, as in traditional ice cream, is balanced with the water content to act as an anti-freeze to prevent it from freezing solid. Types of sugar used include sucrose, dextrose, and inverted sugar to control apparent sweetness. Typically, gelato—like any other ice cream—needs a stabilizing base. Egg yolks are used in yellow custard-based gelato flavors, including zabaione and creme caramel, and non-fat milk solids are also added to gelato to stabilize the base. Starches and gums, especially corn starch, are sometimes also used to thicken and stabilize the mix   more
4 votes
1 comment
Gelato - Voter Comments