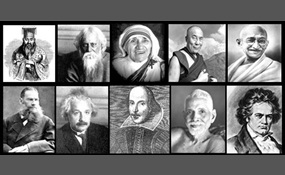 The Child Jesus represents Jesus from his Nativity to age 12. At 13 he was considered to be adult, in accordance with the Jewish custom of his time, and that of most Christian cultures until recent centuries.A number of apocryphal texts, the Infancy...  Gospels grew up with legendary accounts of the intervening period, and these are sometimes shown.The Child Jesus is frequently depicted in art, from around the third or fourth century onwards, in icons and paintings, sculpture, and all the media available. Common depictions are of Nativity scenes showing the birth of Jesus, with his mother, Mary, and his legal father Joseph.Depictions as a baby with his mother, known as Madonna and Child, are iconographical types in Eastern and Western traditions. Other scenes from his time as a baby, of his circumcision, Presentation at the temple, the Adoration of the Three Magi, and the Flight to Egypt, are common. Scenes showing his developing years are rarer.The Scriptures and many apocryphal works were passed down either by word of mouth or through song, and later in works of art. The symbolism of the Child Jesus in art reached its apex during the Renaissance: the holy family was a central theme in the works of Leonardo da Vinci and many other masters   more
8 votes
2 comments
Jesus - Voter Comments

Socrates was a classical Greek Athenian philosopher. Credited as one of the founders of Western philosophy, he is an enigmatic figure known chiefly through the accounts of later classical writers, especially the writings of his students Plato and Xe... nophon and the plays of his contemporary Aristophanes. Many would claim that Plato's dialogues are the most comprehensive accounts of Socrates to survive from antiquity.Through his portrayal in Plato's dialogues, Socrates has become renowned for his contribution to the field of ethics, and it is this Platonic Socrates who lends his name to the concepts of Socratic irony and the Socratic method, or elenchus. The latter remains a commonly used tool in a wide range of discussions, and is a type of pedagogy in which a series of questions is asked not only to draw individual answers, but also to encourage fundamental insight into the issue at hand. Plato's Socrates also made important and lasting contributions to the field of epistemology, and the influence of his ideas and approach remains a strong foundation for much western philosophy that followed   more
5 votes
0 comments
Socrates - Voter Comments
No Comments
Vote & Comment
3

Abraham Lincoln was the 16th President of the United States, serving from March 1861 until his assassination in April 1865. Lincoln led the United States through its greatest constitutional, military, and moral crisis—the American Civil War—preservi... ng the Union, abolishing slavery, strengthening the national government and modernizing the economy. Reared in a poor family on the western frontier, Lincoln was self-educated, and became a country lawyer, a Whig Party leader, Illinois state legislator during the 1830s, and a one-term member of the United States House of Representatives during the 1840s. He promoted rapid modernization of the economy through banks, canals, railroads and tariffs to encourage the building of factories; he opposed the war with Mexico in 1846.After a series of highly publicized debates in 1858 during which he opposed the expansion of slavery, Lincoln lost the U.S. Senate race in Illinois to his archrival, Stephen A. Douglas. Lincoln, a moderate from a swing state, secured the Republican Party presidential nomination in 1860. With almost no support in the South, Lincoln swept the North and was elected president in 1860. His election prompted seven southern slave states to declare their secession from the Union and form the Confederacy. The departure of the Democratic politicians to lead the Confederacy gave Lincoln's party firm control of Congress. The Republican politicians promptly enacted much of their party platform, including a high tariff, free land for colleges in every state, new banking laws, free land for settlers, free land for the transcontinental railroad, and a new US Department of Agriculture. No formula for compromise or reconciliation was found regarding slavery. Lincoln explained in his second inaugural address: "Both parties deprecated war, but one of them would make war rather than let the Nation survive, and the other would accept war rather than let it perish, and the war came.   more
3 votes
0 comments
Abraham Lincoln - Voter Comments
No Comments
Vote & Comment
4

Mohandas Karamchand Gandhi was the preeminent leader of Indian nationalism in British-ruled India. Employing non-violent civil disobedience, Gandhi led India to independence and inspired movements for civil rights and freedom across the world. The h... onorific Mahatma —applied to him first in 1914 in South Africa,—is now used worldwide. He is also called Bapu in India.Born and raised in a Hindu, merchant caste, family in coastal Gujarat, western India, and trained in law at the Inner Temple, London, Gandhi first employed non-violent civil disobedience as an expatriate lawyer in South Africa, in the resident Indian community's struggle for civil rights. After his return to India in 1915, he set about organising peasants, farmers, and urban labourers to protest against excessive land-tax and discrimination. Assuming leadership of the Indian National Congress in 1921, Gandhi led nationwide campaigns for easing poverty, expanding women's rights, building religious and ethnic amity, ending untouchability, but above all for achieving Swaraj or self-rule   more
3 votes
0 comments
Mahatma Gandhi - Voter Comments
No Comments
Vote & Comment
5

Gautama Buddha, also known as Siddhārtha Gautama, Shakyamuni, or simply the Buddha, was a sage on whose teachings Buddhism was founded. A native of the ancient Shakya republic in the Himalayan foothills, Gautama Buddha taught primarily in northeaste... rn India.Buddha means "awakened one" or "the enlightened one." "Buddha" is also used as a title for the first awakened being in an era. In most Buddhist traditions, Siddhartha Gautama is regarded as the Supreme Buddha of our age.Gautama taught a Middle Way between sensual indulgence and the severe asceticism found in the Sramana movement common in his region. He later taught throughout regions of eastern India such as Magadha and Kośala.Gautama is the primary figure in Buddhism, and accounts of his life, discourses, and monastic rules are believed by Buddhists to have been summarized after his death and memorized by his followers. Various collections of teachings attributed to him were passed down by oral tradition, and first committed to writing about 400 years later   more
2 votes
1 comment
Gautama Buddha - Voter Comments

Oskar Schindler was an ethnic German industrialist, German spy, and member of the Nazi party who is credited with saving the lives of 1,200 Jews during the Holocaust by employing them in his enamelware and ammunitions factories, which were located i... n what is now Poland and the Czech Republic respectively. He is the subject of the 1982 novel Schindler's Ark, and the subsequent 1993 film Schindler's List, which reflected his life as an opportunist initially motivated by profit who came to show extraordinary initiative, tenacity, and dedication in order to save the lives of his Jewish employees.Schindler grew up in Zwittau, Moravia, and worked in several trades until he joined the Abwehr, the intelligence service of Nazi Germany, in 1936. He joined the Nazi Party in 1939. Prior to the German occupation of Czechoslovakia in 1938, he collected information on railways and troop movements for the German government. He was arrested for espionage by the Czech government but was released under the terms of the Munich Agreement in 1938. Schindler continued to collect information for the Nazis, working in Poland in 1939 prior to the invasion of that country at the start of World War II   more
1 vote
0 comments
Oskar Schindler - Voter Comments
No Comments
Vote & Comment
8

The Blessed Teresa of Calcutta, M.C., commonly known as Mother Teresa, was an Albanian-born, Indian Roman Catholic Religious Sister.Mother Teresa founded the Missionaries of Charity, a Roman Catholic religious congregation, which in 2012 consisted o... f over 4,500 sisters and is active in 133 countries. They run hospices and homes for people with HIV/AIDS, leprosy and tuberculosis; soup kitchens; children's and family counseling programmes; orphanages; and schools. Members of the order must adhere to the vows of chastity, poverty and obedience, and the fourth vow, to give "Wholehearted and Free service to the poorest of the poor".Mother Teresa was the recipient of numerous honours including the 1979 Nobel Peace Prize. In late 2003, she was beatified, the third step toward possible sainthood, giving her the title "Blessed Teresa of Calcutta". A second miracle credited to her intercession is required before she can be recognised as a saint by the Catholic Church.Admired and respected by many, she has also been accused of failing to provide medical care or painkillers, misusing charitable money, and maintaining positive relationships with dictators   more
1 vote
1 comment
Mother Teresa - Voter Comments

Solomon, also called Jedidiah, was, according to the Book of Kings, the Book of Chronicles, Hidden Words and the Qur'an a king of Israel and the son of David. The conventional dates of Solomon's reign are circa 970 to 931 BC. He is described as the ... third king of the United Monarchy, and the final king before the northern Kingdom of Israel and the southern Kingdom of Judah split. Following the split, his patrilineal descendants ruled over Judah alone.According to the Talmud, Solomon is one of the 48 prophets. In the Qur'an, he is considered a major prophet, and Muslims generally refer to him by the Arabic variant Sulayman, son of David.The Hebrew Bible credits Solomon as the builder of the First Temple in Jerusalem and portrays him as great in wisdom, wealth, and power, but ultimately as a king whose sin, including idolatry and turning away from Yahweh, leads to the kingdom's being torn in two during the reign of his son Rehoboam. Solomon is the subject of many other later references and legends, most notably in the 1st-century apocryphal work known as the Testament of Solomon. In later years, Solomon also came to be known as a magician and an exorcist, with numerous amulets and medallion seals dating from the Hellenistic period invoking his name   more
0 votes
0 comments
Solomon - Voter Comments
No Comments
Vote & Comment
10