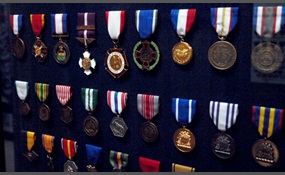 What is the hardest military medal to earn in war? Feel free to enter more!!!

The Medal of Honor is the United States of America's highest military honor, awarded for personal acts of valor above and beyond the call of duty. The medal is awarded by the President of the United States in the name of the U.S. Congress to U.S. mi... litary personnel only. There are three versions of the medal, one for the Army, one for the Navy, and one for the Air Force. Personnel of the Marine Corps and Coast Guard receive the Navy version.The Medal of Honor was created in 1861, early in the American Civil War, to give recognition to men who distinguished themselves "conspicuously by gallantry and intrepidity" in combat with an enemy of the United States. There have been 3,469 Medals of Honor awarded to the nation's soldiers, sailors, airmen, Marines, and coast guardsmen since the decoration's creation, with more than half of them presented for actions during the four years of the Civil War.The Medal of Honor is usually presented by the President in a formal ceremony at the White House, intended to represent the gratitude of the American people, with posthumous presentations made to the primary next of kin   more
4 votes
0 comments
Medal of Honor - Voter Comments
No Comments
Vote & Comment
2

The Hero's Medal is the highest military decoration awarded by the Government of the People's Republic of China.
1 vote
0 comments
Hero's Medal - Voter Comments
No Comments
Vote & Comment
3

The Gold Star medal is a special insignia that identifies recipients of the title "Hero" in the Soviet Union and some of its allies, and several post-Soviet states.
0 votes
0 comments
Gold Star - Voter Comments
No Comments
Vote & Comment
6

Knight's Cross of the Iron Cross

Isaac Butt, Q.C., M.P., was an Irish barrister, politician, Member of Parliament, and the founder and first leader of a number of Irish nationalist parties and organisations, including the Irish Metropolitan Conservative Society in 1836, the Home Go... vernment Association in 1870 and in 1873 the Home Rule League   more
0 votes
0 comments
Isaac Butt - Voter Comments
No Comments
Vote & Comment
Leave a comment...
(Maximum 900 words)