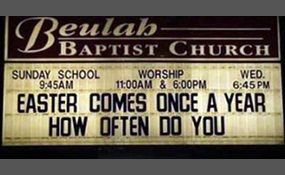 Have most religions lost their ways of moral values and right or wrong and merely promoted profit and the obtaining passage to god? Or gods

Personally as a christian i think the churches have lost their ways of acceptance and humanity but rather just want their money and possibly to impose bad characteristics in people. I have also followed other religions but to avoid a major conflict i believe many of the other religions are doing the same thing.

Sure go to church listen to your preachers and read your bibles. Its your choices after all. And that is the way to god for you all then that is your key.
2 votes
1 comment
Its a house of god and will continue to propose his teachings to those willing to lisiten - Voter Comments

MrFox says2015-05-19T02:50:59.6218207-05:00
Report Post
Religion, especially Abrahamic, never had good morals. Even in the time of Abraham civilization had already developed better morals. And better organisation causing religion to no longer be needed to organize people. Moral values like don't offend my imaginary being, don't have certain thoughts, don't punish criminals, don't invest in the future, don't seek knowledge. Especially Abrahamic religions are barbaric and a destructive of good morals. Good thing most believers don't use logic and ignore most of the implications of their texts.
Vote & Comment
3

Yes the churches are just buildings with people in uniform. They do not speak for my beliefs.

People are given a destiny by the lord how can my destiny given to him be know to these people that i do not know? We all have a choice and its all written. We only have to find out ourselves how its written. But thats my belief
0 votes
0 comments
Yes the churches are just buildings with people in uniform. They do not speak for my beliefs. - Voter Comments
No Comments
Vote & Comment
Leave a comment...
(Maximum 900 words)

OverLordGoldDragon says2015-05-18T12:23:52.3400103-05:00
Report Post
There is a clear bias in the question. You leave no room for those who entirely refute the concept. "Meh" doesn't count because it provides no reason whatsoever - and, in a way, no position whatsoever - and instead makes those who do not do churches or religion at all look lazy/careless/etc.