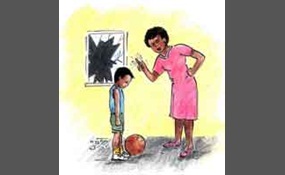 Have you ever reported yourself?

"Yeah!" is a song by American recording artist Usher. It was written by Usher, Lil Jon, Sean Garrett, Patrick J. Que Smith, Ludacris, Robert McDowell and LRoc, and features guest vocals from Lil Jon and Ludacris. It was also produced by Lil Jon, who...  incorporated crunk and R&B—which he coined as Crunk&B—in the song's production. The song was released as the lead single from Usher's fourth studio album Confessions on January 27, 2004, after Usher was told by Arista Records, his label at the time, to record more tracks for the album."Yeah!" topped the US Billboard Hot 100 chart for twelve consecutive weeks, before being replaced by its follow-up single "Burn". "Yeah!" was the longest-running number one single in 2004, subsequently topping the year-end chart on the Hot 100. It was certified platinum by the Recording Industry Association of America. The song received a similar response in other countries, topping fourteen charts worldwide. It was certified platinum in several countries, including Australia, Belgium, Canada, Germany and Norway, and received a two times platinum certification in New Zealand. The song peaked in the top-ten in several Year-end charts."Yeah!" was met with universal critical acclaim, with critics lauding its production, more specifically its combination of crunk and R&B. An accompanying music video, directed by Mr. X, shows Usher performing choreography in a club in front of blue laser beams. "Yeah" won a Best Rap/Sung Collaboration at the 47th Grammy Awards, while being nominated for Record of the Year. The song ranked second on the Billboard Hot 100 2000–2009 Decade-end chart. As of September 2013, the song has sold over 4 million copies in the US   more
9 votes
2 comments
Yeah! - Voter Comments

SweetTea says2014-04-09T05:13:19.6629121-05:00
Report Post
Once ... Way back when I was 17, my Mom & Dad had just bought a new car. It was, maybe, a month old. My Mom asked me to go down to Kroger & pick-up a few things, one morning (during Easter break). We had company & my cousin rode along (she was 16). It was early ... Rush hour ... Memphis. We were maybe 1000 feet from a busy street (Winchester) & I blacked-out for just a few seconds. The car jumped the curb, ran over 2 small trees & stopped just short of a street-light. Thankfully, my cousin had managed to get her foot on the brake. It took both of us to pull the tree out of the bumper. By appearances, the car looked no worse for wear. My cousin drove the rest of the way to Kroger & home. We vowed to not say a word ... By 6 o'clock that night, the steering started messing-up. The car had to be towed to the Ford dealership. My folks were so angry. After all, it was a new car. It had less than 500 miles on it! The next day, our company left. My parents were still stewing over the car. Yes, the dealership had given them a loaner car. Yes, it was going to be fixed under warranty. Still, they were beside themselves. Constantly, they were talking about it. Even after the car was fixed, they wouldn't quit pondering the issue. After 72 hours of domestic torture, I caved. Right in the middle of Shoney's & dinner, I spilled the whole thing. My parents just sat there -- in shock. Finally, my Dad asked, "If you had this wreck, where did it happen?" So, on the way home, I showed them. As a result, I lost "driving privileges" for a month. Word made its way to Chicago & my cousin got grounded for 2 weeks. Then, I was marched to the doctor for a battery of tests. After which, the doctor decided that my "dieting for bikini season" was the cause of my black-out. My mother, who was a dietitian professionally, began calculating everything that I ate & drank. It was a very long summer!

ESocialBookworm says2014-04-09T08:01:46.6580793-05:00
Report Post
@SweatTea thanks for sharing that. My dad let me try to drive once when I was thirteen and Instead of mashing the brakes, I sped faster and was 2 seconds away from drivikng into another car. I have not attempted to drive since. Lol.... By the way, I was actually talking about on DDO. I should have been more specific but yeah...
Privacy Policy | Terms of Use
Sitemap | View Desktop Version
©2021 Debate.org. All rights reserved.