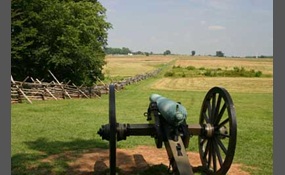 Have you ever visited a historic battlefield in the U.S. or elsewhere?

"Yes" is a song performed by American electro recording duo LMFAO. It was released as the fourth single from the album Party Rock. The song was written by Skyler Austen Gordy and Stefan Kendal Gordy.
15 votes
0 comments
Yes - Voter Comments
No Comments
Vote & Comment
2

"No" is a song by Shakira, released as the second single from her sixth studio album, Fijación Oral Vol. 1, in late 2005. The song features Gustavo Cerati in guitar and backing vocals.
1 vote
0 comments
No - Voter Comments
No Comments
Vote & Comment
Leave a comment...
(Maximum 900 words)

Haroush says2014-04-11T17:55:09.0085888-05:00
Report Post
I've been to Gettysburg before.. That's where I learned about the importance of "Little Round Top" and the "Confederate flank". I also learned a lot about what it was like back then when they fought during that time period. For example, those crazy looking spiky grenades. Not to mention, the dental tools they used. I remember seeing the saw like tool they used in order to cut out parts of someone's mouth. Or the bone saw they used to cut off someone's limb. Something else that intrigued me was what they used mostly for pain during surgery.... Alcohol. (I bet that really helped with pain....)