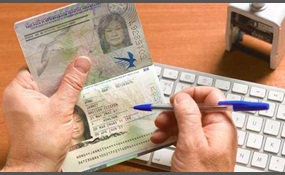 How heavy should border controls be?

Border control security is the lengths we go to keep an eye on those who enter or leave our country.

There shall be no border controls and likely no border fence as well. This is common in several European states. There may be the occasional state policeman, but that's about it.
5 votes
2 comments
No border controls - Voter Comments

CaedaSun says2014-08-15T12:25:00.4454817-05:00
Report Post
The entire world should have no borders. The Earth belongs to each and every one of us. This is our HOME. All of it is. I say no border patrol because that's my ideal. We have to get over ourselves and stop trying to take over land and people. That's all free just as the air in our lungs is free. One day we will realize how petty we are to fight and "protect" things that do not need to be fought over or protected. I DO understand that people are afraid of being invaded or just bombarded by too many people into one state that would take jobs and home and ROOM, apparently. But there are different and better solutions.

No one gets in

Passport checks are one of the most common border control policies. In this policy, security guards and other workers check someone's passports to see if they have permission to enter the country. A passport is a travel document, usually issued by t... he government of a nation, that certifies the identity and nationality of its holder for the purpose of international travel. Standard passports contain the holder's name, place and date of birth, photograph, signature, and other identifying information. Passports are moving towards including biometric information embedded in a microchip embedded in the document, making them machine-readable and difficult to counterfeit. A passport specifies nationality, but not necessarily the place of residence of the passport holder. A passport holder is normally entitled to enter the country that issued the passport, though some people entitled to a passport may not be full citizens with right of abode. A passport is a document certifying identity and nationality; having the document does not of itself grant any rights, such as protection by the consulate of the issuing country, although it may indicate that the holder has such rights. Some passports attest to status as a diplomat or other official, entitled to rights and privileges such as immunity from arrest or prosecution, arising from international treaties. Many countries normally allow entry to holders of passports of other countries, sometimes requiring a visa also to be held, but this is not an automatic right. Many other additional conditions, such as not being likely to become a public charge for financial or other reasons, and the holder not having been convicted of a crime, may be applicable. Where a country does not recognize another, or is in dispute with it, entry may be prohibited to holders of passports of the other party to the dispute, and sometimes to others who have, for example, visited the other country. Some countries and international organisations issue travel documents which are not standard passports, but enable the holder to travel internationally to countries that recognize the documents. For example, stateless persons are not normally issued a national passport, but may be able to obtain a refugee travel document or the earlier "Nansen passport" which enables them to travel to countries which recognize them, and sometimes to return to the issuing country. A country may issue a passport to any person, including non-nationals. A passport is often accepted, in its country of issue and elsewhere, as reliable proof of identity, unrelated to travel   more
3 votes
0 comments
Passport Checks - Voter Comments
No Comments
Vote & Comment
4

No one gets out or in

No one can get in or out of the country. We shall become a massive powerhouse, free from any foreign intervention. Our isolation is splendid.
2 votes
0 comments
No one gets out or in - Voter Comments
No Comments
Vote & Comment
5

Combine the fun of retina scanners with guards who can blow your eyes out. This could include, but is not limited to: laser rifles, plasma weapons, mini-nukes, mini-guns, Gatling guns, anti-material rifles, grenade launchers, EMP guns, AC-130s, stea... lth bombers, and some battleships for good measure. On a more serious note, they'll be equipped pretty heavily, more so than how they normally are   more
2 votes
0 comments
Heavily Armed Guards and Retina Scanners - Voter Comments
No Comments
Vote & Comment
6

No one gets out

Random passport checks are when security guards randomly select individuals to check to see if they have a passport going into the country. This is a very "loose" security measure, but it also saves a lot of money and time. However, security guard... s could also use racial profiling and "reasonable suspicion" to target certain people   more
0 votes
0 comments
Random Passport Checks - Voter Comments
No Comments
Vote & Comment
8

A biometric passport, also known as an e-passport, ePassport or a digital passport, is a combined paper and electronic passport that contains biometric information that can be used to authenticate the identity of travelers. It uses contactless smart...  card technology, including a microprocessor chip (computer chip) and antenna (for both power to the chip and communication) embedded in the front or back cover, or center page, of the passport. Document and chip characteristics are documented in the International Civil Aviation Organization's (ICAO) Doc 9303. The passport's critical information is both printed on the data page of the passport and stored in the chip. Public Key Infrastructure (PKI) is used to authenticate the data stored electronically in the passport chip making it expensive and difficult to forge when all security mechanisms are fully and correctly implemented. The currently standardized biometrics used for this type of identification system are facial recognition, fingerprint recognition, and iris recognition. These were adopted after assessment of several different kinds of biometrics including retinal scan. The ICAO defines the biometric file formats and communication protocols to be used in passports. Only the digital image (usually in JPEG or JPEG2000 format) of each biometric feature is actually stored in the chip. The comparison of biometric features is performed outside the passport chip by electronic border control systems (e-borders). To store biometric data on the contactless chip, it includes a minimum of 32 kilobytes of EEPROM storage memory, and runs on an interface in accordance with the ISO/IEC 14443 international standard, amongst others. These standards intend interoperability between different countries and different manufacturers of passport books. Some national identity cards (e.G. In the Netherlands, Albania and Brazil) are fully ICAO9303 compliant biometric travel documents. However others, such as the USA passport card, are not   more
0 votes
0 comments
Biometric Passport Checks - Voter Comments
No Comments
Vote & Comment
9

Combine biometric checks with guards who can truly pack a punch. This could include, but is not limited to: assault rifles, rifles, shotguns, sub-machine guns, rocket launchers for some reason, grenades for some other reason, tear gas, flamethrowers... , and some tanks for good measure. On a more serious note, they'll be equipped pretty heavily, more so than how they normally are   more
0 votes
0 comments
Heavily Armed Guards and Biometric Checks - Voter Comments
No Comments
Vote & Comment
10

A retinal scan, commonly confused with the more appropriately named "iris scanner", is a biometric technique that uses the unique patterns on a person's retina to identify them. It is not to be confused with another ocular-based technology, iris rec... ognition. The biometric use of this scan is used to examine the pattern of blood vessels at the back of the eye. A biometric identifier known as a retinal scan is used to map the unique patterns of a person's retina. The blood vessels within the retina absorb light more readily than the surrounding tissue and are easily identified with appropriate lighting. A retinal scan is performed by casting an unperceived beam of low-energy infrared light into a person’s eye as they look through the scanner's eyepiece. This beam of light traces a standardized path on the retina. Because retinal blood vessels are more absorbent of this light than the rest of the eye, the amount of reflection varies during the scan. The pattern of variations is converted to computer code and stored in a database   more
0 votes
0 comments
Retina Scanners - Voter Comments
No Comments
Vote & Comment
Leave a comment...
(Maximum 900 words)