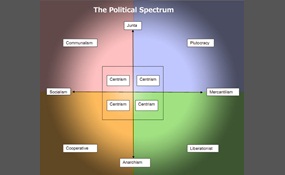 How left/right wing are you?

In left-right politics, left-wing politics are political positions or activities that accept or support social equality, often in opposition to social hierarchy and social inequality. It is typically justified on the basis of concern for those in so... ciety who are perceived as disadvantaged relative to others and an assumption that there are unjustified inequalities that need to be reduced or abolished.The political terms Left and Right were coined during the French Revolution, referring to the seating arrangement in the Estates General: those who sat on the left generally opposed the monarchy and supported the revolution, including the creation of a republic and secularization, while those on the right were supportive of the traditional institutions of the Old Regime. Use of the term "Left" became more prominent after the restoration of the French monarchy in 1815 when it was applied to the "Independents".The term was later applied to a number of movements, especially republicanism during the French Revolution, socialism, communism, and anarchism   more
7 votes
1 comment
Moderate-left - Voter Comments

Right-wing politics are political positions or activities that view some forms of social hierarchy or social inequality as either inevitable, natural, normal, or desirable, typically justifying this position on the basis of natural law or tradition....  Within the right-wing spectrum, views differ on whether hierarchy and inequality stem from traditional social differences or from competition in market economies. In Europe's history, there have been strong collectivist right-wing movements, such as in the social Catholic Right that has exhibited hostility to all forms of liberalism, including economic liberalism, and has historically advocated for paternalist class harmony involving an organic-hierarchical society where workers are protected while hierarchy of classes remain.The term "right wing" has been used to refer to a number of different political positions through history. The political terms Right and Left were coined during the French Revolution, and referred to where politicians sat in the French parliament; those who sat to the right of the chair of the parliamentary president were broadly supportive of the institutions of the monarchist Ancien Régime   more
4 votes
0 comments
Moderate-right - Voter Comments
No Comments
Vote & Comment
3

Far-left politics or extreme-left politics are left-wing politics that are further to the left than mainstream centre-left politics. The far left seeks equality of outcome and the dismantlement of all forms of social stratification. Far leftists see... k to abolish all forms of hierarchy, particularly the inequitable distribution of wealth and power. The far left seeks a society in which everyone is provided equal economic and social opportunities, and no one has excessive wealth or power over others.The far left typically believes that inegalitarian systems must be overthrown through revolution in order to establish egalitarian societies, while the centre left works within the system to achieve egalitarianism. In societies that tolerate dissent, far-left groups usually participate in the democratic process to advance their goals. The far left demands radical changes to dismantle unequal societies, including confiscation of wealth that is concentrated in a small elite, and redistribution of that wealth in an egalitarian manner   more
3 votes
1 comment
Far-left politics - Voter Comments

The centre-left, center-left or moderate left is an adherence to views leaning to the left but closer to the centre on the left-right political spectrum than other left-wing variants. Centre leftists, such as social democrats or social liberals, bel... ieve in working within the established systems to improve social justice. The centre-left promotes a degree of social equality that it believes is achievable through promoting equal opportunity. The centre-left has promoted luck egalitarianism that emphasises that the achievement of equality requires personal responsibility in areas in control by the individual person through their abilities and talents, and social responsibility in areas outside of control by the individual person in their abilities or talents.The centre-left opposes a wide gap between the rich and the poor and supports moderate measures to reduce the gap, such as a progressive income tax, laws prohibiting child labour, minimum wage laws, laws regulating working conditions, limits on working hours, laws to ensure workers' right to organise   more
3 votes
1 comment
Center-left - Voter Comments

In politics, centrism or the centre is a political outlook or specific position that involves acceptance or support of a balance of a degree of social equality and a degree of social hierarchy or social inequality; while opposing political changes w... hich would result in a significant shift of society either strongly to the left or the right. Centre left and centre right politics both involve a general association with centrism combined while leaning somewhat to their respective sides of the spectrum   more
1 vote
1 comment
Centrist - Voter Comments

Centre-right politics, also referred to as moderate-right politics, are politics that lean to the right of the left-right political spectrum, but are closer to the centre than other right-wing variants.From the 1780s to the 1880s, there was a shift ... in the Western world of social class structure and the economy, moving away from the nobility and mercantilism, and moving towards the bourgeoisie and capitalism. This general economic shift towards capitalism affected centre-right movements such as the British Conservative Party that responded by becoming supportive of capitalism   more
1 vote
0 comments
Center-right - Voter Comments
No Comments
Vote & Comment
7

The term ultra-leftism has two overlapping uses. One usage is a generally pejorative term for certain types of positions on the far left that are seen as extreme or intransigent. The term is also used — pejoratively or not — to refer to a particular...  current of Marxist communism, which is closely related to council communism and left communism.Ultra-left currents within left communism are often subject to criticisms from other factions of the left. The left communist organization International Communist Current refuses to work with leftist groups except other left communists or internationalist anarchists. Gilles Dauvé, a left communist theorist, argues that all bourgeois regimes should be opposed, and that revolutionaries should not defend liberal democracy against fascism   more
1 vote
0 comments
Radical left - Voter Comments
No Comments
Vote & Comment
8

Right-wing populism is a political ideology that rejects the existing mainstream political discourse and usually combines laissez-faire liberalism and anti-elitism. This type of populism appeals to the lower and middle classes rather than the elites...  by advocating market liberalization amongst other right-wing causes.From the 1990s right-wing populist parties became established in the legislatures of various democracies including Canada, Norway, France, Israel, Poland, Russia, Romania and Chile, and entered coalition governments in Switzerland, Austria, the Netherlands, New Zealand, and Italy. Although extreme right-wing movements in the US have been studied separately, where they are normally called "radical right", some writers consider them to be the same phenomenon. Right-wing populism is distinct from the historic right, which had been concerned with preserving the "status quo", and mostly do not have roots in their political parties   more
1 vote
0 comments
Far-right - Voter Comments
No Comments
Vote & Comment
9

Specially historically in United States politics, the radical right is a political preference that leans toward extreme conservatism and anti-socialism. The term was first used by social scientists in the 1950s regarding small groups such as the Joh... n Birch Society in the United States, and since has been used for similar groups worldwide.The term "radical" was applied to the groups because they sought to make fundamental changes in institutions and remove from political life persons and institutions that threatened their values or economic interests. They were called "right-wing" primarily because of their opposition to both socialism and communism and their ultraconservative or reactionary tendencies which limited new access to power and statu   more
1 vote
0 comments
Radical-right - Voter Comments
No Comments
Vote & Comment
Leave a comment...
(Maximum 900 words)