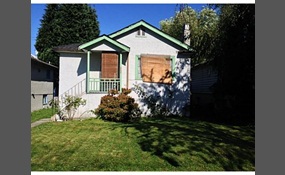 How much do you think was the asking price for the home in this photo in Vancouver, Canada

Take your best guess (I provide the answer in a comment at the bottom, don't peak)

In paleoanthropology, the recent African origin of modern humans, or the "Out of Africa" theory, is the most widely accepted model of the geographic origin and early migration of anatomically modern humans. The theory is called the " Out-of-Africa" ... model in the popular press, and academically the "recent single-origin hypothesis", "Replacement Hypothesis", and "Recent African Origin" model. The concept was speculative until the 1980s, when it was corroborated by a study of present-day mitochondrial DNA, combined with evidence based on physical anthropology of archaic specimens.Genetic studies and fossil evidence show that archaic Homo sapiens evolved to anatomically modern humans solely in Africa, between 200,000 and 60,000 years ago, that members of one branch of Homo sapiens left Africa by between 125,000 and 60,000 years ago, and that over time these humans replaced earlier human populations such as Neanderthals and Homo erectus   more
3 votes
0 comments
Less than $100,000 - Voter Comments
No Comments
Vote & Comment
2