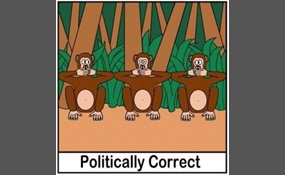 I rarely watch the news on TV. When I do, I can tell you what the story will say before it even happens because everyone is so politically correct. I believe this is counter productive because no one really discusses the root causes of issues. I also believe it will never change and as America becomes more corporatized, it will get much worse.

People try talk about the truth, but the media censors. For example, thousands of people have come forth with information showing 9/11 was an inside job, but none of the major networks will give those people air time. For example, if Loose Change 9/11 was shown on the major networks for a week, it is clear that millions of people would call for a new investigation. Blockbuster video and other video companies refused to even stock the movie. Only now is NetFlix showing it and it is having a huge impa

4 votes
1 comment
People try talk about the truth, but the media censors. For example, thousands of people have come forth with information showing 9/11 was an inside job, but none of the major networks will give those people air time. For example, if Loose Change 9/11 was shown on the major networks for a week, it is clear that millions of people would call for a new investigation. Blockbuster video and other video companies refused to even stock the movie. Only now is NetFlix showing it and it is having a huge impa - Voter Comments

MasterDebater0 says2014-08-10T06:40:30.4032261-05:00
Report Post
The first sentence is true, but 9/11 was NOT an inside job. Now the Bush administration might, might, have had some foreknowledge, but however you slice it it was Al-Qaeda that bombed the trade center. They even took responsibility for it.
Vote & Comment
2

America is so politically correct that it is sickening.

1 vote
0 comments
America is so politically correct that it is sickening. - Voter Comments
No Comments
Vote & Comment
3

Free discussion occurs all the time in the media.

SweetTea says2014-07-29T09:09:47.0425390-05:00
Report Post
I suppose, it depends on who you are & what you say. For example, a few years ago, Isaiah Washington was fired from "Grey's Anatomy" for using the word "fa**ot" in an argument he had with Pat Dempsey. It nearly ended his acting career. Paula Deen admitted to using the "n-word" in her lifetime and the fall-out cut her culinary empire in half. Both individuals apologized. Washington even received death threats! But Michelle Obama recently used a derogatory slur (gyp*ed) and to date she hasn't issued an apology. Go figure!

1814Username says2014-07-30T09:59:30.5825249-05:00
Report Post
I believe we did 9/11 to ourselves so we could go to war. The official story makes absolutely no sense whatsoever. Once you get passed the simple story line and look at the details, the official story is ludicrous. Even people on the 9/11 commission report, do not believe it. Pull up Max Cleland's comments on the commission report. If the very people who did the commission report do not believe it, why on earth should the American people believe it? Half the 9/11 victim's families do not believe the official story. The commission report does not even mention building 7. Why? Because it is obvious it was a controlled demolition. Also, why on earth do people think our government is above any other government? History is full of countries that attacked themselves to go to war. We dropped two nuclear bombs. We lied about the Gulf of Tonkin incident. We experimented on people without their consent. We did MK Ultra. I hate to tell you that there are people in this country that have no regard for human life. We brought over 4,000 high ranking Nazi scientists and officials after WWII. The Bush family brought over Nazi money through the Herriman group. Our leaders will do anything to stay in power and get more power. Evil exists in all governments found on this planet. There are people, who would not bat an eyelash, when they killed for money and power. What is more logical? 19 amatuer terrorists who couldn't fly planes stole four of them and for the first time in history a plane was not intercepted by our military and then we never see two of planes OR we attacked ourselves to go to war for Gold, oil, drugs that finance black projects and tell sell weapons. Come one. Who are we kidding?

SweetTea says2014-07-30T17:54:28.8205574-05:00
Report Post
1814Username ... I have read the 9/11 report, but I do not share your conclusions. I do think the Bush 43 administration missed, or conveniently ignored, numerous pieces of intell. At the least, TSA could've taken stronger security measures. They did not. Was it done intentionally? I've never really made up my mind on that. Bush wanted war, but it wasn't with terrorists or in Afghanistan. He wanted Saddam. It was his personal vendetta. Saddam had tried to assassinate his father & he was going to settle the score. An abuse of power? Definitely. I also think he used the congressional approval after 9/11 to launch that invasion. But create a tragedy like 9/11 to pave the way? That's the stuff conspiracy theorists thrive on!

1814Username says2014-07-30T20:31:40.2447406-05:00
Report Post
We spent less than 15 million dollars on the investigation and started it a year after 9/11 happened. We spent four times that on Monica's blow job. I too read the commission report and it is unbelievably flawed. I can name over 30 conspiracy theories that have been proven true. People try to use "conspiracy theories" as a bad label when the reality is that many are proven true as time goes on. We never see a plane at the Pentagon or in PA. The ground does not swallow planes whole and the coroner who was on site said he did not see any bodies in PA. It looks nothing like a plane crash. At the Pentagon, the most secure building in the world that is protected by an Airforce base just 11 miles away, we do not see one picture of a plane. I can't tell you exactly what happened but I assure you it is not what we are told. Unless you actually believe things like paper passports survive an inferno that "caused" steel framed buildings to collapse but titanium black boxes did not. My suggestion is you watch three videos: http://www.youtube.com/watch?v=4fvJ8nFa5Qk (Barbara Honneger), http://www.youtube.com/watch?v=m4fFTV_SBrw (Dr. Judy Wood) and http://www.youtube.com/watch?v=1zMuCiyUsRU (Susan Lindauer). This will give you very good information on exactly why things do not make sense. Obviously, no one knows the complete truth because frankly when people withhold information there is a reason ---- the government is hiding something. It is like the Pentagon. They said footage of the plane exists but they will not release the video. Now all day we saw the planes hitting the tower. Why on earth will they not release video of the plane hitting the Pentagon --- it is simple --- because a plane never hit it.

1814Username says2014-07-31T09:58:25.3671322-05:00
Report Post
I read that as well. JFK was not killed by Oswald. One of the best books ever on that subject was On the Trail of Assassins by Jim Garrison. Again, JFK wanted to end the war in Vietnam. This would have cost people money. They eliminated him. Also, a week before his assassination, JFK started to push for a lot of information about UFOs. In wiretaps, it was revealed that Marilyn Monroe was going to expose the fact that JFK saw a crashed UFO. There are two reasons why people are always killed in politics: 1) when people get in the way of powerful people making money or 2) people that expose the corruption of others. Make no mistake, history has shown us that in every government in every nation, murders have happened and the true perpetrators are often never caught. My gut instinct on JFK was that it was all about pulling out of Vietnam. Read on the Trail of Assassins. Everyone around Oswald was CIA or ex-CIA. FBI too. For a lone nut gunman, he certainly had many connections. Oswald did not kill Kennedy. The scary part was that George Bush was there and denied it. Then becomes head of the CIA and then President. From harboring Nazi money to 9/11 .....The Bush family is always around. Where there is smoke there is fire. I am not political either, I hate both parties equally, but it is undeniable the level of corruption that exists.
Privacy Policy | Terms of Use
Sitemap | View Desktop Version
©2020 Debate.org. All rights reserved.